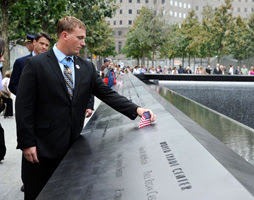 President Barack Obama awarded Sgt. Meyer, 23, the Medal of Honor on September 15 for his actions in saving 36 lives during a battle on September 8, 2009. Sgt. Meyer is the first living marine to receive this award since 1973 for actions in Iraq and Afghanistan.

A ceremony was held by the Memorial’s South Pool to commemorate Sgt. Meyer’s achievements, as well as to honor other veterans from the Port Authority Police Department Marine Corps. Association, Iraq and Afghanistan Veterans Association (IAVA), and a number of veteran construction workers from the World Trade Center site.

Following the ceremony, Sgt. Meyer was given a tour of One WTC and signed a steel beam on the 72nd floor. A mark of significant progress, the tower has reached the 82nd floor.

Video and transcript of remarks by President Obama awarding the Medal of Honor to Sgt. Dakota Meyer