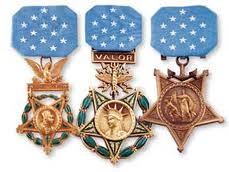 HONOLULU — The City and County of Honolulu and the Honolulu Medal of Honor 2012 host committee are pleased to announce that the Congressional Medal of Honor Society has selected Honolulu to host its 2012 national convention.

“It is an honor for Honolulu to host our country’s most-decorated war heroes,” said Mayor Peter Carlisle. “We owe them a debt of gratitude and look forward to a successful event next year.”

Approximately 85 Medal of Honor recipients plan to gather in Honolulu next year for the annual Medal of Honor Convention, which will be held at the Hale Koa Hotel and other locations from October 2 to 6, 2012.

During the convention, the Medal of Honor recipients will take part in various activities including opportunities for outreach to children, students and veterans to meet and interact with them in and around Honolulu.

Convention co-chairpersons, David J. McIntyre, Jr., President and CEO of TriWest Healthcare Alliance and retired Admiral Tom Fargo, along with the Medal of Honor Society’s liaison and Medal of Honor Recipient Major Drew Dix will be in Honolulu on September 19, 2011, for committee meetings regarding the convention.

The Medal of Honor, established by President Abraham Lincoln in December 1861, is the highest award for valor in action against an enemy that can be earned by a member of the U.S. Armed Forces. The recipients of the Medal of Honor must distinguish themselves conspicuously by gallantry and intrepidity at the risk of life above and beyond the call of duty, according to the Congressional Medal of Honor Foundation’s guidelines.

See article about this year’s convention: The 2011 Congressional Medal of Honor Society Convention that will convene in Louisville, KY on September 28 through October 2, 2011