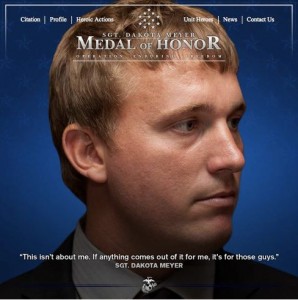 Sgt. Meyer received the Medal of Honor today for his acts of extraordinary heroism in Afghanistan on 8 September 2009. He was born and raised in Columbia, Kentucky, attended local public schools, and graduated from Green County High School.

In 2006, he enlisted in the United States Marine Corps at a recruiting station in Louisville, Kentucky, and completed his basic training at Parris Island Recruit Training Depot later that year. In 2010, Sgt Meyer completed his active duty commitment and he currently serves in the Individual Ready Reserve of the U.S. Marine Corps Reserve.

He is a school trained sniper and highly skilled Marine infantryman. At the time of his deployment to combat duty in Afghanistan he was serving as a Turret Gunner and Driver. His unit assignment at the time of his heroic acts was with Marine Embedded Training Team 2-8, Regional Corps Advisory Command 3-7 operating in Kunar Province, Afghanistan.

In his civilian professional life, he has completed undergraduate college coursework and he currently works for McDan, Inc. in Kentucky’s construction industry.

See previous articles about his bravery while retrieving the bodies of four U.S. servicemen killed in an ambush in Afghanistan in 2009:

U.S. Marine Dakota Meyer to receive the Medal of Honor for actions in Afghanistan