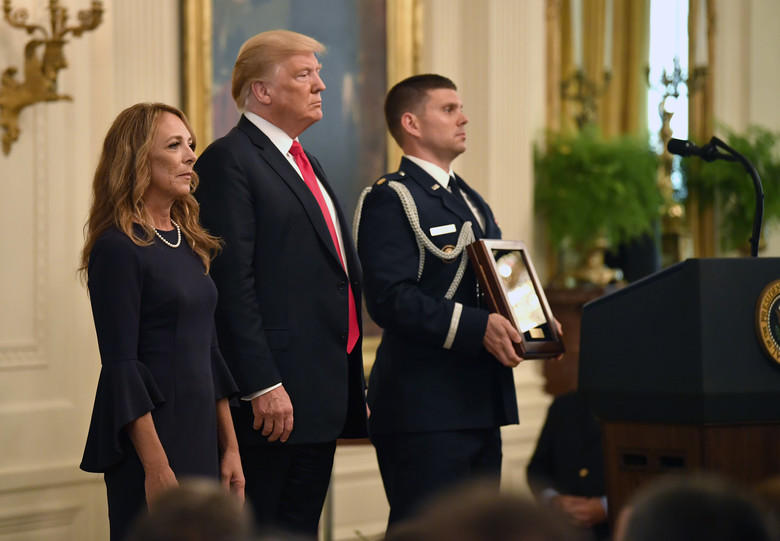 Valerie Nessel, the spouse of U.S. Air Force Tech. Sgt. John Chapman, stands as the citation is read before receiving the Medal of Honor from President Donald J. Trump during a ceremony at the White House in Washington, D.C., Aug. 22, 2018. Sergeant Chapman was posthumously awarded the Medal of Honor for actions on Takur Ghar mountain in Afghanistan on March 4, 2002, his elite special operations team was ambushed by the enemy and came under heavy fire from multiple directions. Chapman immediately charged an enemy bunker through thigh-deep snow and killed all enemy occupants. Courageously moving from cover to assault a second machine gun bunker, he was injured by enemy fire. Despite severe wounds, he fought relentlessly, sustaining a violent engagement with multiple enemy personnel before making the ultimate sacrifice. With his last actions he saved the lives of his teammates.
(U.S. Air Force photo by Wayne A. Clark)

THE PRESIDENT: Thank you very much. Please be seated. Thank you. Thank you, Chaplain. Very well done. Beautiful.

We’re honored to be joined by members of Congress, military leaders, distinguished guests from all across our nation.

I also want to thank VA Secretary Robert Wilkie for joining us. And you are doing a great job. The vets are very happy. I’m getting a lot of great reports. Thank you very much. Along with Senators John Boozman, Richard Blumenthal, Bob Casey, Chris Murphy, and Pat Toomey, and Representative Matt Gaetz and John Larson. Thank you all for being here, very much. Thank you. Thank you all very much. Appreciate it.

We’re gathered together this afternoon to pay tribute to a fallen warrior — a great warrior — Technical Sergeant John Chapman, and to award him our nation’s highest and most revered military honor.

Would you all please join me in welcoming a wonderful family that I just met in the Oval Office, the Chapman family. Thank you. Please stand up. (Applause.)

And to his beautiful wife Valerie, who agrees that he was a very brave man, right from the beginning. Right? You knew that. I know this day has truly brought special meaning. Exactly 26 years ago, you married John. Today, it is our great honor to share his incredible story with the world. So thank you very much, Valerie. I appreciate it.

And to your daughters, Madison and Brianna, we award your dad the Congressional Medal of Honor. And I know he is looking down on you, right now, from Heaven, proud of this day but even more proud of the incredible young women that you have both become. It’s great to know you. Great to have met you. Thank you.

We’re also grateful to be joined by John’s wonderful mom Terry, his sister Lori, his brother Kevin, and Valerie’s parents Rita and Jim Novak. Thank you all for being here. Very great honor. (Applause.) Thank you. And though she could not be here today, somebody that John loved very much, his sister, Tammy. So please give our regards. Thank you.

I also want to recognize Jack Souza, John’s friend and Combat Control teammate who is still recovering from a recent severe injury. Jack, thank you for your noble service. Thank you very much. We appreciate it. Thank you. Thank you, Jack. (Applause.) Appreciate it. Looks like you’re doing well. Doing well? Good. Thank you, Jack.

Three months ago, I awarded the Medal of Honor to Britt for his heroic actions in the same battle we are remembering today.

John Chapman grew up in Windsor Locks, Connecticut. From a very young age, John was determined to protect those in need.

In kindergarten, John noticed that his classmate Bill Brooks was being bullied. As Bill says, “John stepped in and saved me.”

In his high school yearbook, John quoted these words: “Give of yourself before taking of someone else.” It’s very far-sighted. John lived by that motto every single day. Everybody that knew him said that’s the way he lived.

Two years after he graduated high school, John enlisted in the United States Air Force. He was among the elite few to complete Air Force Special Tactics Training, one of the most rigorous training programs in all of the military. John became an expert in deploying undetected onto the battlefield to set up airfields and direct fire support. Now John will become the first Special Tactics Airman to receive the Congressional Medal of Honor.

John met Valerie in Windber, Pennsylvania while he was training with the Army. That was a big day. Good day, right? They married in 1992, and soon their love grew into a beautiful family.

Whenever John was home, he immediately took on “dad duty,” reading to the girls, playing with them, and even building an amazing swing set. Do you remember that? It was a long time ago — swing set.

Soon after the terror attacks of September 11th, John volunteered to deploy to Afghanistan. He walked into his superior’s office, and said, “I need to go.” In one of the most harrowing engagements of Operation Enduring Freedom, John was part of a highly trained team on a combat mission to establish a secure position on the peak of Takur Ghar Mountain.

In the early morning of March 4th, 2002, John and his teammates were preparing to land onto the mountain when their helicopter was struck by heavy machine gun fire and a rocket-propelled grenade. They were under serious attack.

As the helicopter lurched away, Petty Officer First Class Neil Roberts was flung out of the aircraft and onto the top of the mountain as the helicopter crash-landed into the valley below. It was a horrific crash. The team survived the crash and, without hesitation, they volunteered to return to the mountain. They wanted to get Neil.

They landed into a deep snow and heavy machine gun fire coming from three different directions. You couldn’t even see; so many bullets. At over 10,000 feet, they fought the enemy at the highest altitude of any battle in the history of the American military.

John Chapman was the first to charge up the mountain toward the enemy. He killed two terrorists and cleared out the first bunker. John left the safety of the first bunker to fire a second enemy grenade at another bunker. As John fired on the second bunker, he was shot and fell to the ground, and lost consciousness.

Even though he was mortally wounded, John regained consciousness and continued to fight on. And he really fought. We have proof of that fight. He really fought. Good genes. You have good genes.

He immediately began firing at the enemy, who was bombarding him with machine gun fire and rocket-propelled grenades. Despite facing overwhelming force, John bravely and fiercely battled on for over an hour.

As another American Quick Reaction Force helicopter approached, John engaged the enemy and provided covering fire in an attempt to prevent the enemy from shooting down our soldiers, our airmen, and that helicopter.

In this final act of supreme courage, John gave his life for his fellow warriors. Through his extraordinary sacrifice, John helped save more than 20 American servicemembers, some of whom are here today. And I’d like to introduce them.

Our nation is rich with blessings, but our greatest blessings of all are the patriots like John and all of you that just stood, and, frankly, many of the people in this room — I exclude myself, and a few of the politicians — (laughter) –who, like John, carry our freedom on their shoulders, march into the face of evil, and fight to their very last breath so that we can live in freedom, and safety, and peace.

Now it is my privilege to ask Valerie to join me onstage to accept the Congressional Medal of Honor on behalf of the hero she loved and the hero our nation will forever remember: Technical Sergeant John Chapman. Thank you. Please. Please, Valerie. Thank you. (Applause.)

Would the military aide please come forward and read the citation. Thank you.

MILITARY AIDE: The President of the United States of America has awarded, in the name of Congress, the Medal of Honor posthumously to Technical Sergeant John A. Chapman, United States Air Force, for conspicuous gallantry and intrepidity at the risk of life above and beyond the call of duty.

During insertion, the team’s helicopter was ambushed, causing a teammate to fall into an entrenched group of enemy combatants below.

Sergeant Chapman and the team voluntarily reinserted onto the snow-capped mountain, into the heart of a known enemy stronghold to rescue one of their own.

Without regard for his own safety, Sergeant Chapman immediately engaged, moving in the direction of the closest enemy position despite coming under heavy fire from multiple directions. He fearlessly charged an enemy bunker, up a steep incline in thigh-deep snow, and into hostile fire, directly engaging the enemy.

Upon reaching the bunker, Sergeant Chapman assaulted and cleared the position, killing all enemy occupants. With complete disregard for his own life, Sergeant Chapman deliberately moved from cover only 12 meters from the enemy, and exposed himself, once again, to attack a second bunker, from which an emplaced machine gun was firing on his team.

During this assault from an exposed position directly in the line of intense fire, Sergeant Chapman was struck and injured by enemy fire. Despite severe mortal wounds, he continued to fight relentlessly, sustaining a violent engagement with multiple enemy personnel before making the ultimate sacrifice.

By his heroic actions and extraordinary valor, sacrificing his life for the lives of his teammates, Technical Sergeant Chapman upheld the highest traditions of military service and reflected great credit upon himself and the United States Air Force.

THE PRESIDENT: Thank you very much. Thank you. (Applause.)