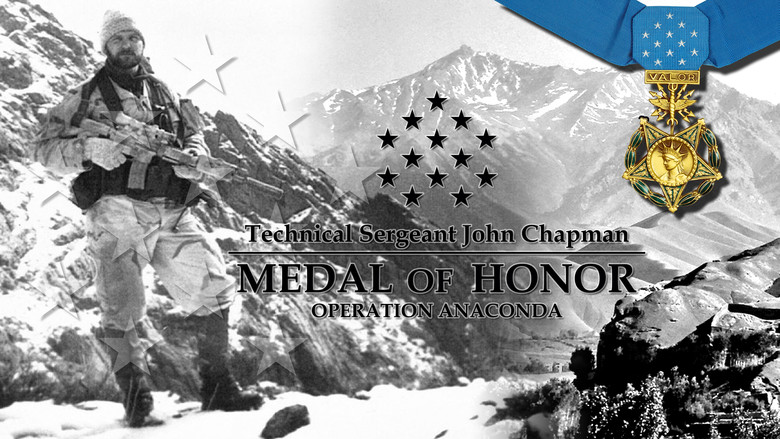 President Donald Trump posthumously awarded the Medal of Honor to the family of a fallen U.S. Air Force Special Tactics Combat Controller at a ceremony on Wednesday, Aug. 22, for his extraordinary heroism in March 2002 while deployed to Afghanistan.

According to the medal nomination, Tech. Sergeant John Chapman distinguished himself on the battlefield through “conspicuous gallantry and intrepidity,” sacrificing his life to preserve those of his teammates. Chapman was part of a joint special operations reconnaissance team deployed to Afghanistan in 2002 that came under overwhelming enemy fire during a heroic rescue attempt on Takur Ghar mountain, Afghanistan, March 4, 2002.

“Tech. Sgt. John Chapman earned America’s highest military award, the Medal of Honor, for the actions he performed to save fellow Americans on a mountain in Afghanistan more than 16 years ago,” said Secretary of the Air Force Heather Wilson. “He will forever be an example of what it means to be one of America’s best and bravest Airmen.”

During the initial insertion onto Afghanistan’s Takur Ghar mountaintop, the MH-47 “Chinook” helicopter carrying Chapman and the joint special operations reconnaissance team flew into an enemy ambush. Intense enemy small arms and rocket-propelled grenade fire significantly damaged the helicopter, throwing Navy Petty Officer 1st Class Neil Roberts into the “hornet’s nest” of enemies below. Following a controlled crash landing a few miles away, the remaining team members elected to fly back to the enemy-infested mountaintop in a heroic attempt to rescue Roberts.

During the rescue attempt, Chapman and his teammates once again received heavy enemy fire from multiple directions. Chapman, despite the enemy fire, charged uphill through thigh-deep snow to directly assault an enemy position. He took the enemy bunker, cleared the position, and killed the enemy fighters occupying the position.

Then, with complete disregard for his own life, Chapman deliberately moved from the bunker’s protective cover to attack a second hostile bunker with an emplaced machine gun firing on the rescue team.

During this bold attack, he was struck and temporarily incapacitated by enemy fire.

Despite his wounds, Chapman regained his faculties and continued to fight relentlessly, sustaining a violent engagement with multiple enemy fighters before paying the ultimate sacrifice. In performance of these remarkably heroic actions, he is credited with saving the lives of his teammates.

“Tech. Sgt. John Chapman fought tenaciously for his nation and his teammates on that hill in Afghanistan,” said Air Force Chief of Staff General David L. Goldfein. “His inspiring story is one of selfless service, courage, perseverance, and honor as he fought side by side with his fellow Soldiers and Sailors against a determined and dug-in enemy. Tech. Sgt. Chapman represents all that is good, all that is right, and all that is best in our American Airmen.”

He continued, “I extend my deepest thanks to the members of Tech. Sgt. Chapman’s family, his military family, and the Airmen, Soldiers, Sailors and Marines who were his brothers on the battlefield and who have remained committed to honoring his legacy. He is a true American hero.”

“This is a reflection of our commitment to recognizing the heroic actions of our Airmen,” said Chief Master Sgt. of the Air Force Kaleth O. Wright. “As Chapman’s story reminds us, we have a sacred duty to honor the actions and sacrifices of all our service members. I share our Airmen’s deepest gratitude to the Chapman family, as well as the family members of all those who gave their lives serving our great nation.”

The Medal of Honor is the nation’s most prestigious military decoration. It is awarded by the president, in the name of Congress, to military members who have distinguished themselves conspicuously by gallantry and intrepidity at the risk of life, above and beyond the call of duty, while engaged in action with an enemy of the United States.

Chapman will be the 19th Airman awarded the Medal of Honor since the Department of the Air Force was established in 1947. He will be the first Airman recognized with the medal for heroic actions occurring after the Vietnam War.