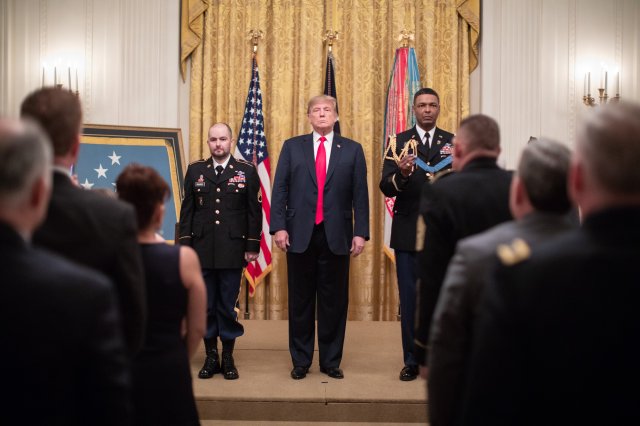 President Donald J. Trump presented the Medal of Honor to former Staff Sgt. Ronald Shurer II at a ceremony Monday, for his heroic actions during an operation in Shok Valley, Afghanistan.

Shurer, who serves as a member of the Secret Service Counter Assault Team, and his wife Miranda, were invited to the White House to meet with the president several weeks ago. However, Trump said they had no clue as to why.

“(Shurer) walked into the Oval Office, and I told Ron he was going to receive our nation’s highest military honor,” the president said. “It will be a moment I will never forget.”

Born in Fairbanks, Alaska, Shurer spent most of his life growing up in Washington State. With a desire to serve, he tried to enlist but was initially rejected by the military due to a medical condition, the president said.

“I can’t believe it! That was a bad mistake,” said Trump, garnering a laugh from the audience.

After the attacks on Sept. 11, 2001, Shurer enlisted as a medic with the U.S. Army. He quickly completed his Advanced Individual Training, and it didn’t take long for Shurer to join Special Forces.

On his second deployment, April 6, 2008, Shurer put his life on the line to save the lives of four Special Forces Soldiers and 10 Afghan commandos.

“Ron was among the few dozen Special Forces [Soldiers] and 100 Afghan commandos that dropped by helicopter into Shok Valley — a rocky, barren valley, far away from any reinforcements,” Trump said. “Ron was the only medic in the team, and while he was still at the base of the mountain, the first team began to scale the cliffs toward the village.”

As the lead element moved up the mountain, more than 200 well-trained enemies ambushed the American and Afghan forces. A storm of rocket-propelled grenades and machine gun and sniper fire rained down on the joint force. Former Staff Sgt. Ryan Wallen was one of the first to be injured. Shurer ran to him to treat his injuries.

“[The team] heard over the radio that American fighters near the top of the mountain were pinned down, and some were critically injured,” Trump said. “There was blood all over the place. It was a tough, tough situation to be in.”

Shurer joined a small team of Soldiers and commandos and began to move up the mountain, fighting back and dodging gunfire along the way.

When he reached the top, one of Shurer’s close friends — an Afghan interpreter named Edris Khan, who went by C.K. — was already dead. Then-Staff Sgt. Dillon Behr and then-Staff Sgt. Luis Morales were also injured, and Shurer did all he could to treat their wounds.

“Ron’s presence during that time was calm, cool and collected, and he is the only reason why I am alive today,” Behr said during a media roundtable Sunday. “At one moment I thought I was going to pass … Ron slapped me across the face and said, ‘Wake up, you’re not going to die today!'”

According to Behr, the bullet that struck him went through the ball in his hip, barely missing his femoral artery. Behr was the communications sergeant during the operation.

Through all the chaos, there was a brief moment that “Ron realized that this was probably (going to be the) end,” Trump said, adding that Shurer just said a prayer, “asking that his wife and son would be okay with what was going to happen.”

“I realized that this situation was deteriorating and I remember saying a prayer out loud, ‘God, you’ve just got to help us,'” said then-Capt. Kyle Walton during the media event. Walton was the commander during that operation.

“We’d already called in innumerable danger-close air strikes. Right after I said that prayer, there was a pretty devastating explosion directly on top of our position.”

“I remember, as my ears were popping and the dust cleared … Ron Shurer had his body over the casualties. Even at the final moment, when we were sure that it was over, Ron was still thinking about Dillon, Luis, and the other guys around.”

Ron continued to care for his comrades. Later on in the fight, then-Staff Sgt. John Walding was shot and received a traumatic amputation to his leg. Shurer “directed another (Soldier) to help stem the bleeding,” Trump said.

Then-Master Sgt. Scott Ford, the team sergeant during the operation, was also injured. Initially, Ford was shot in the chest plate. Shortly after, another sniper bullet hit Ford — this time penetrating his left arm and bouncing off Shurer’s helmet.

“Ron said it felt like he had been hit over the head with a baseball bat,” Trump said. “He got up, and in pretty bad shape, bandaged Scott’s arm.”

Egressing from the scene, Shurer and a team of commandos and Special Forces Soldiers used some tubular nylon webbing to help lower the casualties down the side of the mountain.

“When they reached the base of the mountain, Ron raced to each patient, giving them lifesaving care. They were bleeding profusely and [he prepared] them to be evacuated by helicopter,” Trump said. “Ron was not done yet. He charged back to the mountain … and then rejoined the fight.

“For more than six hours, Ron bravely faced down the enemy. Not a single American died in that brutal battle, thanks in great measure to Ron’s heroic actions,” the president said.

“Ron epitomizes the values of our team, of the Green Berets everywhere, the U.S. Army, and of the American population. And all those things came together during that battle,” Walton said during the media event. “We are all here today in large part due to Ron’s efforts. And we’re able to help our nation recognize this guy, as well as the service he continues to provide to our nation.”