Marine Pfc. Hector A. Cafferata Jr., who earned the Medal of Honor at the Chosin Reservoir during the Korean War, died April 12 at the age of 86.

Cafferata was a rifleman with Fox Company, 2nd Battalion, 7th Marines, 1st Marine Division, on Nov. 28, 1950. More than 10,000 Chinese troops had surrounded Gen. Douglas MacArthur’s U.N. forces at the Chosin Reservoir, including 8,000 from the Marine division. On a frozen, rocky promontory, the 230 or so Marines of Company F had been assigned to protect the Toktong Pass, a narrow escape route through the Nangnim Mountains.

The other members of Cafferata’s fire team became casualties at the pass during the initial phase of “a vicious attack launched by a fanatical enemy of regimental strength against his company’s hill position,” according to his award citation.

With temperatures hovering around 30 below zero, the lone warrior rushed from his hooch wearing little more than a light jacket. Armed with grenades and a rifle, he squared off against relentless fire from automatic weapons, rifles, grenades and mortars. When the smoke cleared, Cafferata had killed at least 15 of the enemy, wounded countless more, and forced those who remained to withdraw.

Heavy gunfire and a well-placed grenade announced the arrival of enemy reinforcements later that morning. The grenade landed in the shallow entrenchment in which wounded Marines found cover. The 21-year-old braved the gunfire, grabbed the grenade, and threw it clear of his fellow Marines. Cafferata’s right hand and arm were seriously wounded in the explosion. Despite the intense pain, he continued to fight until struck by a sniper’s bullet. 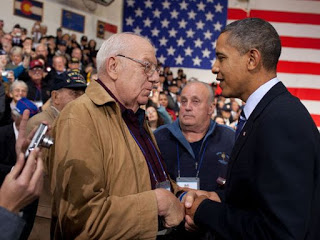 “Pvt. Cafferata, by his fortitude, great personal valor, and dauntless perseverance in the face of almost certain death, saved the lives of several of his fellow Marines and contributed essentially to the success achieved by his company in maintaining its defensive position against tremendous odds,” according to his citation.

Cafferata was awarded the Medal of Honor by President Harry S. Truman at a White House ceremony on Nov. 24, 1952. He was one of 42 Marine vets to receive the nation’s highest military award for valor for actions in the Korean War — 14 of whom were awarded for actions in the Chosin Reservoir campaign. Seven of those awards were posthumous. There are 76 MOH recipients alive today, according to the Congressional Medal of Honor Society.

Cafferata was born on Nov. 4, 1929, in New York City. He played semi-pro football and worked at the Sun Dial Corp. when he enlisted in 1948, according to his obituary. He died in Venice, Florida, just north of Cape Coral, where a junior elementary school was named in his honor. Cafferata is survived by his wife, Doris, and four children.