On this date March 25, 2016, National Medal of Honor Day we remember Specialist Four Santiago J. Erevia, recipient of the Medal of Honor who died on Wednesday March 23, 2016, in San Antonio, Texas. 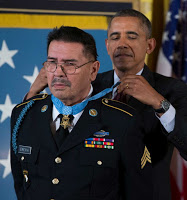 One of the great heroes of the Vietnam War, Erevia received the Distinguished Service Cross  for his heroism in Vietnam on May 21 1969. On March 18, 2014, President Obama presented the Medal Of Honor to Erevia. It was determined after a review  that Erevia  was a victim of discrimination and denied the Medal of Honor in 1969.

Specialist Four Santiago J. Erevia distinguished himself by acts of gallantry and intrepidity above and beyond the call of duty while serving as a radio telephone operator in Company C, 1st Battalion (Airmobile), 501st Infantry, 101st Airborne Division (Airmobile) during search and clear mission near Tam Ky, Republic of Vietnam on May 21, 1969. After breaching an insurgent perimeter, Specialist Four Erevia was designated by his platoon leader to render first aid to several casualties, and the rest of the platoon moved forward. As he was doing so, he came under intense hostile fire from four bunkers to his left front. Although he could have taken cover with the rest of the element, he chose a retaliatory course of action. With heavy enemy fire directed at him, he moved in full view of the hostile gunners as he proceeded to crawl from one wounded man to another, gathering ammunition. Armed with two M-16 rifles and several hand grenades, he charged toward the enemy positions behind the suppressive fire of the two rifles. Under very intense fire, he continued to advance on the insurgents until he was near the first bunker. Disregarding the enemy fire, he pulled the pin from a hand grenade and advanced on the bunker, leveling suppressive fire until he could drop the grenade into the bunker, mortally wounding the insurgent and destroying the fortification. Without hesitation, he employed identical tactics as he proceeded to eliminate the next two enemy positions. With the destruction of the third bunker, Specialist Four Erevia had exhausted his supply of hand grenades. Still under intense fire from the fourth position, he courageously charged forward behind the fire emitted by his M-16 rifles. Arriving at the very edge of the bunker, he silenced the occupant within the fortification at point blank range. Through his heroic actions the lives of the wounded were saved and the members of the Company Command Post were relieved from a very precarious situation. His exemplary performance in the face of overwhelming danger was an inspiration to his entire company and contributed immeasurably to the success of the mission. Specialist Four Erevia’s conspicuous gallantry, extraordinary heroism, and intrepidity at the risk of his own life, above and beyond the call of duty, were in keeping with the highest traditions of military service and reflect great credit upon himself, his unit, and the United States Army.