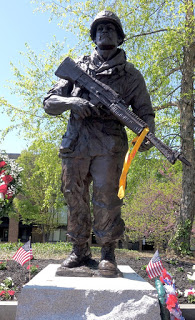 Michael Joseph Crescenz (January 14, 1949–November 20, 1968) was a United States Army Corporal (Cpl) during the Vietnam War who posthumously received the Medal of Honor for his actions near the Hiep Duc village of Vietnam on November 20, 1968. Michael was honored with a bronze monument on April 24th 2016 at the Philadelphia Vietnam Veterans Memorial where he shares these special grounds with 646 fellow Philadelphians who made the ultimate sacrifice for their country.


Cpl. Crescenz distinguished himself by conspicuous gallantry and intrepidity in action while serving as a rifleman with Company A. In the morning his unit engaged a large, well-entrenched force of the North Vietnamese Army whose initial burst of fire pinned down the lead squad and killed the 2 point men, halting the advance of Company A. Immediately, Cpl. Crescenz left the relative safety of his own position, seized a nearby machine gun and, with complete disregard for his safety, charged 100 meters up a slope toward the enemy’s bunkers which he effectively silenced, killing the 2 occupants of each. Undaunted by the withering machine gun fire around him, Cpl. Crescenz courageously moved forward toward a third bunker which he also succeeded in silencing, killing 2 more of the enemy and momentarily clearing the route of advance for his comrades. Suddenly, intense machine gun fire erupted from an unseen, camouflaged bunker. Realizing the danger to his fellow soldiers, Cpl. Crescenz disregarded the barrage of hostile fire directed at him and daringly advanced toward the position. Assaulting with his machine gun, Cpl. Crescenz was within 5 meters of the bunker when he was mortally wounded by the fire from the enemy machine gun. As a direct result of his heroic actions, his company was able to maneuver freely with minimal danger and to complete its mission, defeating the enemy. Cpl. Crescenz’s bravery and extraordinary heroism at the cost of his life are in the highest traditions of the military service and reflect great credit on himself, his unit, and the U.S. Army.