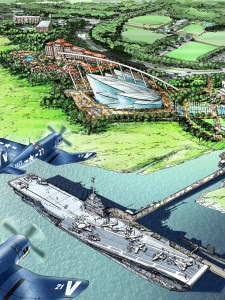 Patriots Point Naval and Maritime Museum announced plans this week that it has entered into an agreement with the Congressional Medal of Honor Society to develop a permanent landside location for the National Medal of Honor Museum on Charleston Harbor.

The endeavor – arguably the most significant decision to come from Patriots Point in decades – will have a lasting positive economic impact on the Charleston area and South Carolina, and will serve to inspire generations of Americans.

“We are honored that the Congressional Medal of Honor Society has recognized our unique mission and location.” Chandler continued. “Every South Carolinian should be proud that the recipients of our nation’s highest honor selected our state and Patriots Point as the home of their legacy.”

The National Medal of Honor Museum Foundation will hold a lease from PPDA for the property and will be responsible for raising funds to design, build and operate the museum. No operating funds from Patriots Point Development Authority will be used for construction or operation of the museum.

The project is expected to cost more than $100 million. In addition, the museum will be supported by a multi-million dollar hospitality and consumer component that will feature a world-class destination hotel with amenities, including a conference center.