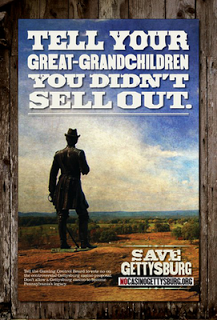 On April 14th, 2011, the Pennsylvania Gaming Control Board rejected a second proposal to bring casino gambling to the doorstep of Gettysburg National Military Park.

“Both personally, and on behalf of our members, I would like to thank the members of the Pennsylvania Gaming Control Board for their thoughtful deliberation and insightful decision. By stating that the hallowed ground of America’s most blood-soaked battlefield is no place for this type of adults-only enterprise, they have reiterated the Commonwealth of Pennsylvania’s commitment to its priceless history and upheld its obligation to protect such sites from wanton and unnecessary degradation.”

Since it was announced last year, the proposal to open Mason-Dixon Gaming Resort a scant half-mile from Gettysburg National Military Park has drawn immense opposition — an early April survey by a nationally renowned polling and research firm found that only 17 percent of Pennsylvanians supported the idea, with 66 percent actively opposed and 57 percent indicating that such a facility would be “an embarrassment” to the Commonwealth.

Tens of thousands of petitions were submitted against the project and nearly 300 prominent historians united to urge its rejection, as did the national leadership of the Vietnam Veterans Memorial Fund and the American Legion. Other prominent Americans who lent their name to the campaign to protect Gettysburg include Susan Eisenhower, Emmy-winning filmmaker Ken Burns, two-time Pulitzer Prize-winning author David McCullough, Medal of Honor recipient Paul W. Bucha, renowned composer John Williams and entertainers Matthew Broderick, Stephen Lang and Sam Waterston.