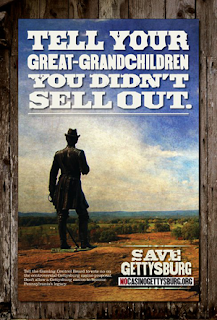 According to a recent abc27 News report by Dennis Owens, Wait continues for Category 3 casino applicants, investors David LeVan and Joseph Lashinger Jr from the Eisenhower Resort and Convention Center who applied for a license with the Pennsylvania Gaming and Control Board to build a casino just 1/2 mile from the southern border of the Gettysburg National Military Park in Gettysburg, PA will have to wait a little longer for a verdict given that two new board members must “wade through mounds of paperwork and reams of testimony.”

“Board members are typically mum about pending applications, but new member Keith McCall said he’s already up to speed on the issues and the applicants. He knows where he’d like the new casino to go. He wouldn’t tell abc27 News, but did say this about the No Casino Gettysburg protesters, some of whom were present at the board meeting in Harrisburg last week:

“Out of hand you just can’t discount their concerns. We all know it and love it as hallowed ground so it certainly will weigh on the decision making process,” McCall said.

A coalition of state and national preservation groups: the Civil War Preservation Trust, National Parks Conservation Association, National Trust for Historic Preservation and Preservation Pennsylvania conveyed to Adams County, Pa., businessman David LeVan their decision to oppose his effort to open a casino a half-mile to the south of Gettysburg National Military Park.

“Some places are just too important to be treated with anything less than the greatest respect, and Gettysburg is one of those places,” said Richard Moe, president of the National Trust for Historic Preservation. “Anyone who has visited the battlefield in recent years can attest to the fact that commercial development is threatening the visitor experience at Gettysburg, and this proposed casino would greatly exacerbate the problem. A new casino located so close to this sacred soil is simply unacceptable.”

The site is also within the historically sensitive “study area” of the battlefield, as defined by the American Battlefield Protection Program (the battlefield preservation arm of the National Park Service). It also lies along the Emmitsburg Road, at the heart of the Journey Through Hallowed Ground National Scenic Byway (created in October 2009) and Journey Through Hallowed Ground National Heritage Area (signed into law in May 2008). Such designations are not undertaken lightly and, according to the letter, “reinforce our belief that this is a region of tremendous historic significance that we have a duty to safeguard for future generations.”

In 2005 and 2006 No Casino Gettysburg helped prevent the proposed “Crossroads” casino just one mile from the Gettysburg National Military Park.

Paul Bucha, Medal of Honor recipient from the Vietnam War and past President of the Congressional Medal of Honor Society along with filmmaker Ken Burns, two-time Pulitzer Prize-winning author David McCullough and President Eisenhower’s granddaughter Susan Eisenhower released four videos to discuss their objections to the proposed Gettysburg casino (1/2 mile from the Gettysburg National Military Park).