Medal of Honor recipients from Idaho will be honored throughout the state with the naming of Highway 3 as North Idaho’s Medal of Honor Highway. Gov. Butch Otter recently signed Senate Bill 1050 designating the stretch of highway running from Interstate 90 near Rose Lake to Highway 12 near Spalding.

It was along that route in St. Maries, where World War II veteran and Medal of Honor recipient Vernon Baker lived last year until his death.

Veterans in other parts of the state will identify Medal of Honor highways in those areas.

“We sponsored the legislation to not only give recognition to these valiant servicemen, but to also honor the thousands of military men and women who have made sacrifices to defend our freedoms and country,” Henderson said.

Vernon Joseph Baker was a United States Army officer who received the United States military’s highest decoration, the Medal of Honor, for his actions in World War II. He was awarded the medal for his actions on April 5–6, 1945 near Viareggio, Italy, when he and his platoon killed 26 enemy soldiers and destroyed six machine gun nests, two observer posts and four dugouts.

In 1993, a study commissioned by the U.S. Army described systematic racial discrimination in the criteria for awarding medals during World War II. At the time, no Medals of Honor had been awarded to black soldiers who served in World War II. After an exhaustive review of files, the study recommended that several black Distinguished Service Cross recipients have their awards upgraded to the Medal of Honor. On January 13, 1997, President Bill Clinton awarded the medal to seven African American World War II veterans; Baker was the only recipient still living at the time.

Officials in northern Idaho also approved the naming of a road that runs parallel to U.S, Highway 95, Vernon J. Baker Boulevard after Baker in December 2010. 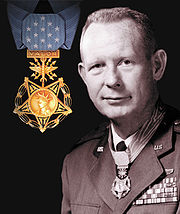 Retired Air Force Lt. Col. Bernie Fisher who was at the signing ceremony is the only Idahoan to have been bestowed the Medal of Honor for service in Vietnam, for leading a two-ship element of A-1 Skyraiders to the A Shau Valley on March 10, 1966.

Maj. Fisher observed a fellow airman crash land on the battle-torn airstrip. In the belief that the downed pilot was seriously injured and in imminent danger of capture, Maj. Fisher announced his intention to land on the airstrip to effect a rescue. Although aware of the extreme danger and likely failure of such an attempt, he elected to continue. Directing his own air cover, he landed his aircraft and taxied almost the full length of the runway, which was littered with battle debris and parts of an exploded aircraft. While effecting a successful rescue of the downed pilot, heavy ground fire was observed, with 19 bullets striking his aircraft. In the face of the withering ground fire, he applied power and gained enough speed to lift-off at the overrun of the airstrip. Citation

The private sector and veteran groups will pay for special signage that the Idaho Transportation Department will be erecting along the North Idaho Medal of Honor Highway to honor these Idahoans for their service to our nation in its armed forces.
Resources

In World War I, Thomas C. Neibaur became both the first Latter-day Saint and the first Idahoan to receive the Medal of Honor.

Full List of Medal of Honor Recipients with Idaho attachments 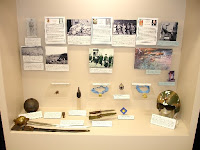 A tribute to Idaho’s Medal of Honor Recipients.

There are two actual Medals on exhibit; the Civil War (Navy) Medal issued to Gurdon H. Barter and the Korean War (Army) Medals issued to David B. Bleak.