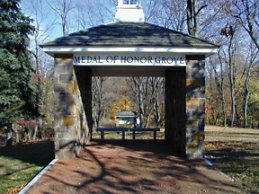 On March 8th, 2011, State Senator Andy Dinniman announced that his legislation to designate a section of Route 23 as the Medal of Honor Grove Highway was approved by the Senate Transportation Committee.

“This is a great way to honor our veterans and to remind residents that the Medal of Honor Grove, a unique and historic memorial site, is located right here in Chester County.” Dinniman said.

Dinniman became involved with efforts to restore and save the grove after it came to his attention that the site had been allowed to fall into disrepair and may be sold to a developer.

He said that designating the highway for the Medal of Honor Grove would be a fitting tribute to all Medal of Honor recipients, while helping raise awareness of the memorial site.

Dinniman said he was contacted by many people concerned that the Medal of Honor Grove was unimportant to the foundation and, in addition to not being properly maintained, was in danger of being sold.

“The Freedoms Foundation in Valley Forge maintains the Medal of Honor Grove and has chapters in a number of areas around the United States that educate young Americans about America. For a number of years a few of these chapters have been complaining to the Board of Directors at Freedoms Foundation at Valley Forge about the conditions at the Medal of Honor Grove.

A chapter in the mid-west offered to raise large sums of money to maintain the Grove, Charlestown Township offered to purchase the Grove and put it into perpetuity, but were turned down. A family of a Medal of Honor recipient wanted to replace the dead tree that was placed there in their son’s honor, but were refused permission. Approximately 12 or 14 men of the Military have earned the Medal of Honor in Iraq and Afghanistan and nothing has been placed in their honor at the Grove. There are also 4 men from the Civil War yet to be recognized. Members of their own Board have resigned as a result of the above actions.

It would appear that it is the attention of someone or persons to let the Grove deteriorate to the point where they would say it has to be sold. Senator Dinniman pointed out, if the States had known of these conditions, they would have gladly donated fifty thousand dollars to maintain the area.” AOH

Dinniman wrote to the foundation asking why the grove had been allowed to fall into disrepair.

The Freedoms Foundation at Valley Forge in a July 30 open letter defended its actions in concentrating its financial resources on its educational mission rather than in maintaining the Medal of Honor Grove.

“We intend no disrespect to the Medal of Honor recipients; however, the cost of maintaining the 52 acres is huge and has been a struggle for some time,” wrote Michael Di Yeso, president and CEO of the Freedoms Foundation.

“When faced with the costs of educating young people versus the cost of maintaining the grove, we have been forced to make difficult decisions.”

Dinniman said he met with Di Yeso and other Freedoms Foundation board members July 29th, 2010.

In an interview regarding that meeting, Dinniman said he endeavored to point out to the men “that it would be inappropriate to diminish the significance of the grove to promote the education program.

“They seem to focus more on the educational mission rather than the grove.

“I said they are both intertwined and both part of the fiduciary responsibility of the Freedoms Foundation.”

According to Chester County Daily Local News in the article by Anne Pickering, Records say sale of Medal of Honor Grove was pursued:

“Despite claims from the Freedoms Foundation at Valley Forge that they weren’t trying to sell the Medal of Honor Grove, a review of minutes from the foundation’s board of directors’ meetings indicate they were actively pursuing a sale in 2008 and 2009.”

“In fact, the board voted May 13, 2009, to enter into an agreement with Brandolini Companies LP to sell 50 acres of the 88-acre property, including most of the 52-acre Medal of Honor grove, for about $12 million. Two board members voted against it. Read more of the article on Daily Local News.”

Dinniman organized three clean-up days for the grove and more than 1,000 volunteers participated.

The Freedoms Foundation also organized clean-up days and between the two, the grove has been restored. Medal of Honor recipients Joe Marm, Sammy Davis and Jim Livingston pitched in to help and to thank the volunteers for their time and efforts.