Chief Master Sergeant Richard Loy Etchberger was a non-commissioned officer in the United States Air Force who posthumously received the United States military’s highest decoration, the Medal of Honor, for his actions during the Battle of Lima Site 85 in the Vietnam War.

As a radar technician, he served at the summit of one of the tallest mountains in Laos, where he and a small team manned a radar station guiding American pilots in the air campaign against North Vietnam.

On March 11, 1968, the site came under attack from North Vietnamese soldiers. Chief Etchberger continued to direct air strikes and call for air rescue on his emergency radio, thus enabling the air evacuation force to locate their position. Etchberger tended to the wounded and fought off the advancing North Vietnamese troops until a rescue helicopter arrived. 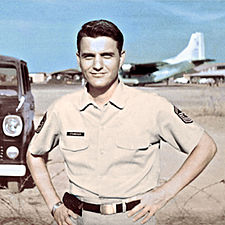 Etchberger loaded his wounded men, one by one, each time exposing himself to enemy fire. But as the helicopter headed toward an air base in Thailand, an enemy soldier below fired into the underside of the aircraft, fatally wounding Etchberger. Of those 19 men on the mountain that night, only seven made it out alive. Three of them owed their lives to the actions of Chief Etchberger.

Etchberger was recommended for the Medal of Honor shortly after his death, but the nomination was rejected by President Lyndon B. Johnson. The Lima Site mission was still classified at the time, and the U.S. was not supposed to have soldiers in Laos. Etchberger was instead awarded the second highest decoration, the Air Force Cross. The cross was presented to his family during a secret ceremony at the Pentagon.

It was only after the Lima Site mission had been declassified fourteen years after Etchberger’s death that his sons learned their father’s true fate; they had previously been told that he died in a helicopter accident. In the early 2000s, veterans of the Air Force’s 1st Combat Evaluation Group began requesting that Etchberger’s Air Force Cross be upgraded to the Medal of Honor. The upgrade was approved by Secretary of the Air Force Michael B. Donley in 2008, and by the U.S. Congress in 2009.

The medal was formally presented to his three sons by President Barack Obama during a ceremony at the White House on September 21, 2010.

“But the greatest memorial of all to Dick Etchberger is the spirit that we feel here today, the love that inspired him to serve — the love for his country and love for his family. And the most eloquent expression of that devotion are the words he wrote himself to a friend back home just months before he gave his life to our nation.

“I hate to be away from home,” he wrote from that small base above the clouds, “but I believe in the job.” He said, “It is the most challenging job I’ll ever have in my life.” And then he added, “I love it.”

Our nation endures because there are patriots like Chief Master Sergeant Richard Etchberger and our troops who are serving as we speak who love this nation and defend it. And their legacy lives on because their families and fellow citizens preserve it.