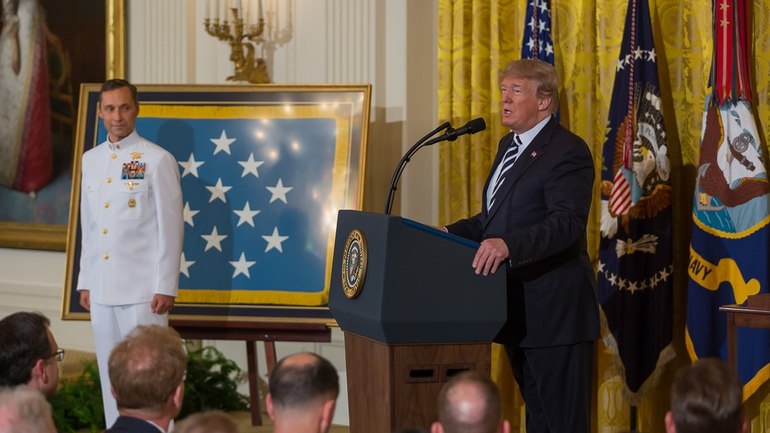 THE PRESIDENT: Thank you very much, Chaplain. That’s beautiful. And thank you to Deputy Secretary of Defense Patrick Shanahan. Thank you, Patrick. Undersecretary of the Navy Thomas Modly — thank you. Thank you, Thomas. VA Secretary nominee — will do a fantastic job for us — Robert Wilkie. And Congressmen Scott Taylor and Brian Mast. Thank you, fellas, very much. Thank you.

Members of the Armed Forces and distinguished guests, please sit down. That actually worked out very nicely. (Laughter.) And join me in officially welcoming Master Chief Britt Slabinski to the White House. A special man. A truly brave person.

Joining Britt today is his son Bryce — Bryce, thank you very much — a rising senior at a wonderful school known to the world as Ohio State. Great place. That’s a great school. Along with Britt’s sisters, Brenda and Teka, and Brenda’s husband, Tom. Thank you very much for being here. Here as well are Britt’s significant other, Christina, and her two children John and Meghan, who we just met in the Oval Office. That’s a special place, too. Thank you all for joining us for this really special day and special ceremony. Thank you very much.

Finally, we’re honored to be joined by several previous Congressional Medal of Honor recipients. Would you please stand. Would you please stand. Thank you, fellas. (Applause.) Very, very special people. Your names and your immortal acts of valor are forever engraved in the memory of our nation. Our nation will always be grateful to you, and you know that.

Today, we induct a new name into the world’s most exclusive gathering of heroes. And that’s exactly what it is. Britt was raised in Northampton, Massachusetts. He became an Eagle Scout by the age of 14. His father was a veteran, who served as a frogman in the underwater demolitions group of the U.S. Navy. Those are tough people. While Britt was in junior high, his dad brought him to their reunion. Britt was inspired by their bond of friendship, their stories of service, and their boundless love of country.

Throughout the grueling months of training, Britt proved himself every single step of the way. In 1990, he graduated the legendary BUDS training course and he earned that special badge worn only by the bravest few: the SEAL Trident.

In 2002, Britt was called to support Operation Enduring Freedom in Afghanistan. In the late evening hours of March 3rd that year, he led an elite team on a combat mission to establish a secure position on the peak of a 10,000-foot mountain known as Takur Gahr.

Britt and his teammates were preparing to exit the helicopter onto the mountain when their aircraft was struck by a machine gun and machine gun fire like they’ve never seen before, and a rocket-propelled grenade from al Qaeda terrorists down below. Not a good feeling. As the helicopter lurched away from the assault, Petty Officer First Class Neil Roberts was flung out of the aircraft — tremendous, tremendous, horrible thing to witness — and onto the side of the mountain before the helicopter crashed into the valley below.

After surviving, barely, the violent crash, Britt and his team were retrieved by a second helicopter; also, by the way, piloted by very brave people. At this point, Britt received information suggesting their comrade, Neil Roberts, the man thrown out of the helicopter, was probably still alive. The team faced a choice: to wait for reinforcements and pretty much safety, or to return immediately to the enemy stronghold in the hope of saving Neil’s life.

They would be outmanned, outgunned, and fighting uphill on a steep, icy mountain. And every solider knows you don’t want to fight uphill. They learned that at Gettysburg — you don’t fight uphill. But they would face freezing temperatures, and bitter winds, at the highest altitude of battle in the history of the American military. This was the highest point where we ever fought. The odds were not good. They were not in their favor.

But Britt and his team didn’t even hesitate for a moment. They made their decision. For them it was an easy one. They went back to that mountain.

When their helicopter reached the mountain peak, they jumped out into a furious onslaught of machine gunfire like none of them had ever seen before.

Britt and his teammate Sergeant John Chapman charged uphill toward the enemy, where John was shot after clearing a bunker.

Britt continued to engage the enemy, repeatedly exposing himself to horrendous fire. Two of his other teammates, Stephen “Turbo” Toboz and Brett Morganti, both suffered very, very serious leg injuries.

Britt helped them to safety and called in airstrikes as continuous fire drove them ever-further down the face of the mountain — got worse and worse, more and more dangerous. He kept going.

In a treacherous descent, Britt and his men carried Turbo through the snow. At one point, they fashioned a makeshift harness out of their gun straps to hoist Turbo down a 13-foot cliff, in itself treacherous, because if you miss that little area, they go down the mountain. No stopping them.

When they could go no further, Britt tended to the wounded and coordinated their escape until his team was finally evacuated from enemy territory.

To the Gold Star family members of those heroes who are here today, please stand up. Please, stand up. (Applause.) Please. It’s an honor to have you accept our nation’s profound sorrow and a deep love and everlasting gratitude. These were incredible, incredible men, and you can be proud that they were in your family. And they are looking down right now, and they are very, very proud of you. Thank you very much. Thank you for being here. Thank you.

To Britt, and to all of the men of Robert’s Ridge: You waged a fierce fight against the enemies. And these really have become the enemies of America and the enemies of all civilization. Through your actions, you demonstrated that there is no love more pure, and no courage more great, than the love and courage that burns in the hearts of American patriots.

We are free because warriors like you are willing to give their sweat, their blood, and, if have to, their lives for our great nation.

Britt, you went on to serve many more years in the U.S. Navy before finally retiring in 2014. Today, he continues his life of serving by volunteering with the Navy SEAL Foundation, and on behalf of Gold Star families. Special, special, incredible families. And as one of his fellow service members testifies, he is an amazing father to Bryce, who, like his dad, is now an Eagle Scout.

Britt wants the country to know that for him, the recognition he is about to receive is an honor that falls on the whole team — he wants you folks to know that — on the whole team, on every American warrior who fought the forces of terror on that snowy Afghan ridge. Each of them has entered the eternal chronicle of American valor and American bravery.

Britt, we salute you, we thank you. We thank God for making you a United States SEAL. We love our Navy SEALs. They’ve very special, very incredible people. It’s now my tremendous privilege to present to you the Congressional Medal of Honor.

And I’d like the military aide to come forward and please read the citation. Thank you.

MILITARY AIDE: The President of the United States, in the name of the Congress, takes pleasure in presenting the Medal of Honor to Senior Chief Special Warfare Operator Sea, Air, and Land, Britt K. Slabinski, United States Navy, for service as set forth in the following: For conspicuous gallantry and intrepidity at the risk of his life above and beyond the call of duty while assigned to a joint task force in support of Operation Enduring Freedom.

In the early morning of March 4, 2002, Senior Chief Special Warfare Operator Slabinski led a reconnaissance team to its assigned area atop a 10,000-foot, snow-covered mountain. Their insertion helicopter was suddenly riddled with rocket-propelled grenades and small-arms fire from previously undetected enemy positions. The crippled helicopter lurched violently and ejected one teammate onto the mountain before the pilots were forced to crash land in the valley far below.

Senior Chief Slabinski boldly rallied his five remaining team members, and marshaled supporting assets for an assault to rescue their stranded teammate. During reinsertion, the team came under fire from three directions, and one teammate started moving uphill toward an enemy strongpoint. Without regard for his own safety, Senior Chief Slabinski charged directly toward enemy fire to join his teammate. Together, they fearlessly assaulted and cleared the first bunker they encountered.

The enemy then unleashed a hail of machinegun fire from a second hardened position only 20 meters away. Senior Chief Slabinski repeatedly exposed himself to deadly fire to personally engage the second enemy bunker and orient his team’s fires in the furious, close-quarters firefight. Proximity made air support impossible. And after several teammates became casualties, the situation became untenable. Senior Chief Slabinski maneuvered his team to a more defensible position, directed airstrikes in very close proximity to his team’s position, and requested reinforcements.

As daylight approached, accurate enemy mortar fire forced the team further down the sheer mountainside. Senior Chief Slabinski carried a seriously wounded teammate through deep snow, and led a difficult trek across precipitous terrain while calling in fire on the enemy, which was engaging the team from the surrounding ridges.

Throughout the next 14 hours, Senior Chief Slabinski stabilized casualties and continued the fight against the enemy until the hill was secured and his team was extracted. By his undaunted courage, bold initiative, leadership, and devotion to duty, Senior Chief Slabinski reflected great credit upon himself and upheld the highest traditions of the United States Naval Service.