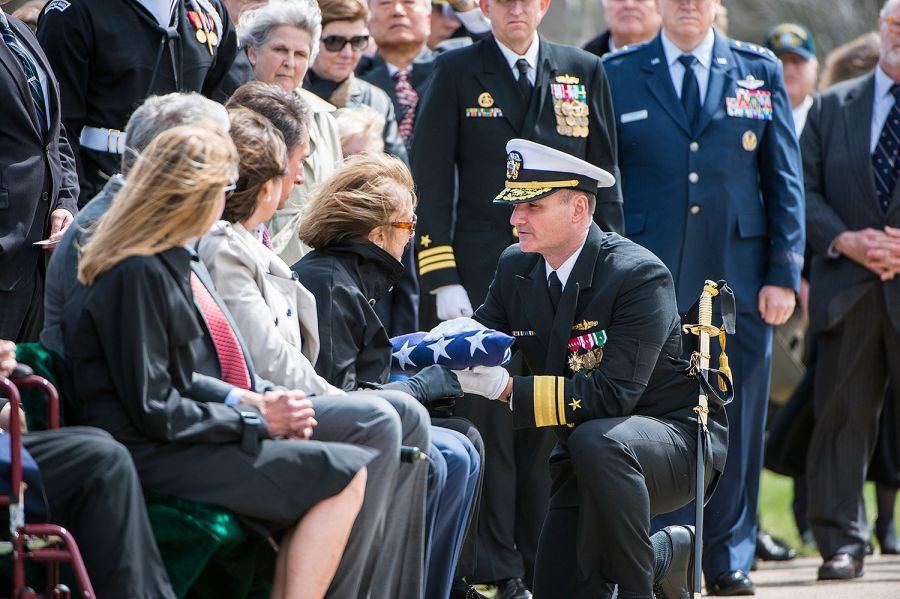 FALL RIVER, Mass. (Tribune News Service) — An event called “An Evening to Remember” held at Heritage State Park, drew people who were eager to remember and to honor the late Navy Capt. Thomas J. Hudner Jr., a Fall River native who received the Medal of Honor for a valiant attempt to save the life of a fellow Navy pilot during the Korean War.

“Tonight, we are here to honor an American hero, a husband, a father and our friend,” said Cristoff Shay, executive vice president at Battleship Cove.

Shay said Hudner’s lesson for all time was, “doing what is right whatever the cost.”

Sawejko well remembered Hudner from his decades as a member of Battleship Cove’s board of directors.

“He was my mentor,” Sawejko said, adding that Hudner was a calming presence on those occasions board meetings grew heated.

Naval Capt. Thomas G. Kelly (Ret.), standing behind the podium at the Heritage State Park Visitors Center with the amethyst ribbon of his Medal of Honor around his neck, spoke of Hudner’s influence on him.

“Tom set me on the path that I would never disgrace the Medal of Honor,” Kelly said.

“History belongs to all of us,” said Naval Cmdr. Dr. David Kohnen (Ret.), a naval historian who has written several books, and is the Director of Maritime History Research Center at the Naval War College in Newport R.I. “Someday all of us will belong to history.”

Kohnen spoke of Hudner’s bravery in crash landing his plane next to the downed and flame engulfed plane of Ensign Jesse Brown, the first African-American Naval aviator in U.S. history.

Brown was shot down Dec. 4, 1950, behind enemy lines during the Korean War. Hudner was in Brown’s squadron, and purposely crashed his plane, jumped out, and raced to Brown in an attempt to save his wingman’s life. Hudner wasn’t able to save his comrade, and he was given the Medal of Honor, the nation’s highest military award for valor, for his heroic effort.

“Hudner and Brown fit into the reality of history,” Kohnen said, talking about the long effort to give African Americans their proper place in the military. “We must constantly revisit this difficult past.”

“Hudner asked Brown to fly with him,” Kohnen said. “They flew 40 missions together.”

Kohnen said every Medal of Honor recipient reminds us of and stands for all those who have served.

“Hudner and Brown will always wear their golden wings among the angels of our navy,” Kohnen said.

“Battleship Cove was a very special place for my dad, given its location in his hometown of Fall River,” said Hudner’s son, Thomas Hudner III

He remembered his father as an extremely modest hero, saying that, when asked about his attempt to save Brown, his father would often say he was just doing his job.