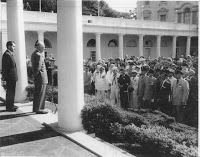 President Eisenhower speaking to the 210 Medal of Honor recipients at the White House May 30, 1958. 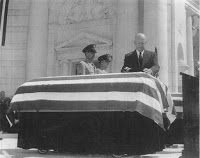 President Eisenhower places the Medal of Honor on the casket of the Unknown Serviceman of the Korean War, Arlington Cemetery, May 30, 1958.

Master Sergeant Homer L. Wise of Stamford CT was one of seven recipients of the Medal of Honor who served as honorary pall bearers. 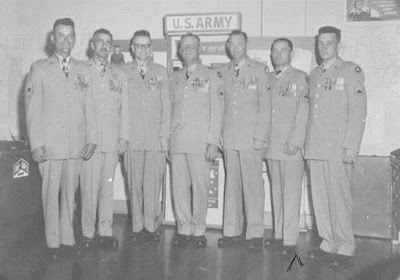 MEDAL OF HONOR RECIPIENTS MEMORIAL DAY MAY 30, 1958 PRIOR TO THE

DEDICATION OF THE TOMB OF THE UNKNOWNS, AT ARLINGTON CEMETERY

While his platoon was pinned down by enemy small-arms fire from both flanks, he left his position of comparative safety and assisted in carrying 1 of his men, who had been seriously wounded and who lay in an exposed position, to a point where he could receive medical attention. The advance of the platoon was resumed but was again stopped by enemy frontal fire. A German officer and 2 enlisted men, armed with automatic weapons, threatened the right flank. Fearlessly exposing himself, he moved to a position from which he killed all 3 with his submachinegun. Returning to his squad, he obtained an Ml rifle and several antitank grenades, then took up a position from which he delivered accurate fire on the enemy holding up the advance. As the battalion moved forward it was again stopped by enemy frontal and flanking fire. He procured an automatic rifle and, advancing ahead of his men, neutralized an enemy machinegun with his fire. When the flanking fire became more intense he ran to a nearby tank and exposing himself on the turret, restored a jammed machinegun to operating efficiency and used it so effectively that the enemy fire from an adjacent ridge was materially reduced thus permitting the battalion to occupy its objective.

For conspicuous gallantry and intrepidity at risk of life above and beyond the call of duty in action with the enemy near Altavilla, Italy, 13 September 1943. When Company I attacked an enemy-held position on Hill 424, the 3d Platoon, in which Pvt. Crawford was a squad scout, attacked as base platoon for the company. After reaching the crest of the hill, the platoon was pinned down by intense enemy machinegun and small-arms fire. Locating 1 of these guns, which was dug in on a terrace on his immediate front, Pvt. Crawford, without orders and on his own initiative, moved over the hill under enemy fire to a point within a few yards of the gun emplacement and single-handedly destroyed the machinegun and killed 3 of the crew with a hand grenade, thus enabling his platoon to continue its advance. When the platoon, after reaching the crest, was once more delayed by enemy fire, Pvt. Crawford again, in the face of intense fire, advanced directly to the front midway between 2 hostile machinegun nests located on a higher terrace and emplaced in a small ravine. Moving first to the left, with a hand grenade he destroyed 1 gun emplacement and killed the crew; he then worked his way, under continuous fire, to the other and with 1 grenade and the use of his rifle, killed 1 enemy and forced the remainder to flee. Seizing the enemy machinegun, he fired on the withdrawing Germans and facilitated his company’s advance. 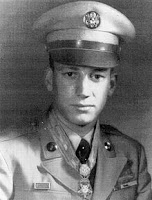 Cpl. Crump, a member of Company L, distinguished himself by conspicuous gallantry and outstanding courage above and beyond the call of duty in action against the enemy. During the night a numerically superior hostile force launched an assault against his platoon on Hill 284, overrunning friendly positions and swarming into the sector. Cpl. Crump repeatedly exposed himself to deliver effective fire into the ranks of the assailants, inflicting numerous casualties. Observing 2 enemy soldiers endeavoring to capture a friendly machine gun, he charged and killed both with his bayonet, regaining control of the weapon. Returning to his position, now occupied by 4 of his wounded comrades, he continued his accurate fire into enemy troops surrounding his emplacement. When a hostile soldier hurled a grenade into the position, Cpl. Crump immediately flung himself over the missile, absorbing the blast with his body and saving his comrades from death or serious injury. His aggressive actions had so inspired his comrades that a spirited counterattack drove the enemy from the perimeter. Cpl. Crump’s heroic devotion to duty, indomitable fighting spirit, and willingness to sacrifice himself to save his comrades reflect the highest credit upon himself, the infantry and the U.S. Army.

For conspicuous gallantry and intrepidity at risk of life above and beyond the call of duty, in action on 8 February 1944, near Carano, Italy. Cpl. Huff volunteered to lead a 6-man patrol with the mission of determining the location and strength of an enemy unit which was delivering fire on the exposed right flank of his company. The terrain over which he had to travel consisted of exposed, rolling ground, affording the enemy excellent visibility. As the patrol advanced, its members were subjected to small arms and machinegun fire and a concentration of mortar fire, shells bursting within 5 to 10 yards of them and bullets striking the ground at their feet. Moving ahead of his patrol, Cpl. Huff drew fire from 3 enemy machineguns and a 20mm. weapon. Realizing the danger confronting his patrol, he advanced alone under deadly fire through a minefield and arrived at a point within 75 yards of the nearest machinegun position. Under direct fire from the rear machinegun, he crawled the remaining 75 yards to the closest emplacement, killed the crew with his submachine gun and destroyed the gun. During this act he fired from a kneeling position which drew fire from other positions, enabling him to estimate correctly the strength and location of the enemy. Still under concentrated fire, he returned to his patrol and led his men to safety. As a result of the information he gained, a patrol in strength sent out that afternoon, 1 group under the leadership of Cpl. Huff, succeeded in routing an enemy company of 125 men, killing 27 Germans and capturing 21 others, with a loss of only 3 patrol members. Cpl. Huff’s intrepid leadership and daring combat skill reflect the finest traditions of the American infantryman.

2d Lt. Rudolph (then T/Sgt.) was acting as platoon leader at Munoz, Luzon, Philippine Islands. While administering first aid on the battlefield, he observed enemy fire issuing from a nearby culvert. Crawling to the culvert with rifle and grenades, he killed 3 of the enemy concealed there. He then worked his way across open terrain toward a line of enemy pillboxes which had immobilized his company. Nearing the first pillbox, he hurled a grenade through its embrasure and charged the position. With his bare hands he tore away the wood and tin covering, then dropped a grenade through the opening, killing the enemy gunners and destroying their machinegun. Ordering several riflemen to cover his further advance, 2d Lt. Rudolph seized a pick mattock and made his way to the second pillbox. Piercing its top with the mattock, he dropped a grenade through the hole, fired several rounds from his rifle into it and smothered any surviving enemy by sealing the hole and the embrasure with earth. In quick succession he attacked and neutralized 6 more pillboxes. Later, when his platoon was attacked by an enemy tank, he advanced under covering fire, climbed to the top of the tank and dropped a white phosphorus grenade through the turret, destroying the crew. Through his outstanding heroism, superb courage, and leadership, and complete disregard for his own safety, 2d Lt. Rudolph cleared a path for an advance which culminated in one of the most decisive victories of the Philippine campaign. 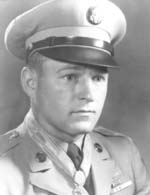 Cpl. Rosser, distinguished himself by conspicuous gallantry above and beyond the call of duty. While assaulting heavily fortified enemy hill positions, Company L, 38th Infantry Regiment, was stopped by fierce automatic-weapons, small-arms, artillery, and mortar fire. Cpl. Rosser, a forward observer was with the lead platoon of Company L, when it came under fire from 2 directions. Cpl. Rosser turned his radio over to his assistant and, disregarding the enemy fire, charged the enemy positions armed with only carbine and a grenade. At the first bunker, he silenced its occupants with a burst from his weapon. Gaining the top of the hill, he killed 2 enemy soldiers, and then went down the trench, killing 5 more as he advanced. He then hurled his grenade into a bunker and shot 2 other soldiers as they emerged. Having exhausted his ammunition, he returned through the enemy fire to obtain more ammunition and grenades and charged the hill once more. Calling on others to follow him, he assaulted 2 more enemy bunkers. Although those who attempted to join him became casualties, Cpl. Rosser once again exhausted his ammunition obtained a new supply, and returning to the hilltop a third time hurled grenades into the enemy positions. During this heroic action Cpl. Rosser single-handedly killed at least 13 of the enemy. After exhausting his ammunition he accompanied the withdrawing platoon, and though himself wounded, made several trips across open terrain still under enemy fire to help remove other men injured more seriously than himself. This outstanding soldier’s courageous and selfless devotion to duty is worthy of emulation by all men. He has contributed magnificently to the high traditions of the military service.

M/Sgt. Kouma, a tank commander in Company A, distinguished himself by conspicuous gallantry and intrepidity at the risk of his life above and beyond the call of duty in action against the enemy. His unit was engaged in supporting infantry elements on the Naktong River front. Near midnight on 31 August, a hostile force estimated at 500 crossed the river and launched a fierce attack against the infantry positions, inflicting heavy casualties. A withdrawal was ordered and his armored unit was given the mission of covering the movement until a secondary position could be established. The enemy assault overran 2 tanks, destroyed 1 and forced another to withdraw. Suddenly M/Sgt. Kouma discovered that his tank was the only obstacle in the path of the hostile onslaught. Holding his ground, he gave fire orders to his crew and remained in position throughout the night, fighting off repeated enemy attacks. During 1 fierce assault, the enemy surrounded his tank and he leaped from the armored turret, exposing himself to a hail of hostile fire, manned the .50 caliber machine gun mounted on the rear deck, and delivered pointblank fire into the fanatical foe. His machine gun emptied, he fired his pistol and threw grenades to keep the enemy from his tank. After more than 9 hours of constant combat and close-in fighting, he withdrew his vehicle to friendly lines. During the withdrawal through 8 miles of hostile territory, M/Sgt. Kouma continued to inflict casualties upon the enemy and exhausted his ammunition in destroying 3 hostile machine gun positions. During this action, M/Sgt. Kouma killed an estimated 250 enemy soldiers. His magnificent stand allowed the infantry sufficient time to reestablish defensive positions. Rejoining his company, although suffering intensely from his wounds, he attempted to resupply his tank and return to the battle area. While being evacuated for medical treatment, his courage was again displayed when he requested to return to the front. M/Sgt. Kouma’s superb leadership, heroism, and intense devotion to duty reflect the highest credit on himself and uphold the esteemed traditions of the U.S. Army.

Never forget to use the online HTML converter when it comes to composing or converting articles for the web.