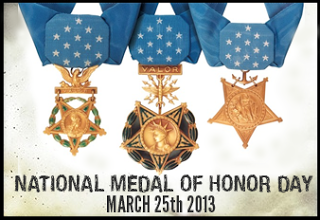 The recipients will first commemorate Medal of Honor Day, on the 150th anniversary of the Medal’s first presentation, with a wreath-laying at 2:00 at the Tomb of the Unknowns. The recipients will then present the Citizen Service Before Self Honors (CSBSH) awards at 2:30 to four honorees selected from a nationwide campaign for going above and beyond for their fellow man.

The four honorees for the Citizen Service Before Self Honors (CSBSH) are:

These four honorees were chosen by Medal of Honor recipients from a pool of 23 finalists, announced last month in the CSBSH
program that collected hundreds of hero nominations from across the
U.S. between September and December 2012. It’s all part of the Medal of Honor Society and Foundation’s mission to share the values of the medal with all Americans.

“We believe that the values of the medal, courage, sacrifice and
selflessness are present in all Americans. These four hometown heroes
have demonstrated these values by acting courageously to change fate. We
celebrate these heroes today, and thank them for the hope they give
us,” said Medal of Honor Society President Hal Fritz.

Citizen Service nominations were made online by Members of Congress,
police and fire officials, mayors, governors and ordinary citizens.
Nominations for heroes surrounding the Sandy Hook Elementary School
shootings in December are being handled separately later this year.

The complete list of CSBSH finalists, including details of their
heroic stories, and more information on the CSBSH program is available
at www.csbsh.org.