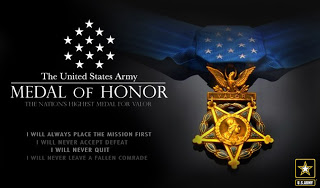 The official blog of the United States Army in recognition of Medal of Honor Day, has presented eight surprising facts about the award.

March 25 marks Medal of Honor Day – a day set aside to pay respects
to service members who distinguished themselves through conspicuous
gallantry and intrepidity at the risk of life above and beyond the call
of duty.

Citations for Medal of Honor recipients describe feats
of courage, strength, and resilience. Recipients overcame the paralysis
of fear, and in some cases, they persevered in spite of wounds that
would normally be so painful as to be disabling. Some of these heroes
willingly gave their lives for the sake of their buddies.

While it is worth setting aside a day to remember the
extraordinary service and sacrifice symbolized by the Medal of Honor, it
is even more important share that legacy with current and future
generations.

1. The earliest actions for which the Medal was awarded took place before the Civil War had even begun (Feb. 13-14, 1861). Bernard J.D. Irwin was an Assistant Surgeon in the Army when he voluntarily went to the rescue of 2d Lt. George N. Bascom who was trapped with 60 members of the 7th Infantry. Irwin and 14 men began the 100-mile trek to Bascom’s forces riding mules. After fighting and capturing Apaches along the way, as well as recovering stolen horses and cattle, Irwin reached Bascom’s forces and helped break the siege. The Medal of Honor was awarded to Irwin on Jan. 24, 1894 – more than 30 years after he performed his heroic deed.

2. Originally, the Medal of Honor was only awarded to enlisted service members. On March 3, 1863, this was extended to include officers as well.

3. There are three versions of the Medal of Honor: U.S. Army, U.S. Navy and U.S. Air Force. Members of the U.S. Marines Corps and U.S. Coast Guard are eligible to receive the Navy version. Each of the armed services maintains their own regulations governing the award.

4. Only one woman has received the Medal of Honor and her award was temporarily rescinded. President Andrew Johnson presented the Medal of Honor to Dr. Mary E. Walker on Nov. 11, 1865 for her work as a Contract Acting Assistant Surgeon in a series of battles from First Bull Run in 1861 to the Battle of Atlanta in 1864. Caught by Confederate troops and arrested as a spy, she also spent four months as a Prisoner of War. Although her award was rescinded along with hundreds of others in 1917, upon the passage of legislation that stated the medal could only be given to persons who had engaged in “actual combat with an enemy,” Walker’s Medal of Honor was restored on June 10, 1977 by President Jimmy Carter.Because of her selfless service during the war, Dr. Mary E. Walker became the only woman in U.S. history to receive the Medal of Honor, which was rescinded in 1917 and restored in 1977.

5. The Medal of Honor recommendation process can take in excess of 18 months with intense scrutiny every step of the way because of the need for accuracy. The following organizations and individuals play key roles in the Army Medal of Honor recommendation process: the Soldier’s Chain of Command, a Member of Congress, Department of the Army Personnel Command, Manpower and Reserve Affairs, Chief of Staff of the Army, Secretary of the Army, Secretary of Defense and the President. To see a visual depiction of the process, visit http://www.army.mil/medalofhonor/steps.html

6. Children of Medal of Honor recipients are not subject to quotas if they are qualified and desire to attend the U.S. military academies.

7. Medal of Honor recipients have uniform privileges, which allow them to wear their uniforms at any time or place they choose, unlike other military personnel or retirees.

8. Although not required by law or military regulation, service members are encouraged to salute Medal of Honor recipients as a gesture of respect and courtesy regardless of rank or status and, if the recipients are wearing the medal, whether or not they are in uniform. This is the only instance where a Soldier will receive a salute from members of a higher rank.