Specialist Sabo will receive the Medal of Honor posthumously for his heroic actions in combat on May 10, 1970, while serving as a rifleman in Company B, 3d Battalion, 506th Infantry, 101st Airborne Division in Se San, Cambodia.

On that day, when he and his platoon were ambushed by a large enemy force, Specialist Sabo immediately charged the enemy position, killing several enemy soldiers. He then assaulted an enemy flanking force, successfully drawing their fire away from friendly soldiers and ultimately forcing the enemy to retreat.

While securing a re-supply of ammunition, an enemy grenade landed nearby. Specialist Sabo picked it up, threw it, and shielded a wounded comrade with his own body – absorbing the brunt of the blast and saving his comrade’s life.

Although wounded by the grenade blast, he continued to charge the enemy’s bunker. After receiving several serious wounds from automatic weapons fire, he crawled towards the enemy emplacement and, when in position, threw a grenade into the bunker.

The resulting explosion silenced the enemy fire, but also ended Specialist Sabo’s life. His indomitable courage and complete disregard for his own safety saved the lives of many of his platoon members.

Specialist Sabo’s widow, Rose Mary Sabo-Brown and his brother, George Sabo, will join the President at the White House to commemorate his example of selfless service and sacrifice. 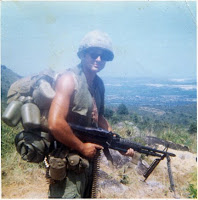 Sabo’s unit nominated him for the Medal of Honor, but the paperwork was lost until Tony Mabb, a Vietnam veteran of the 101st Airborne Division and a writer for the “Screaming Eagle” association magazine, came across a thick file on Sabo while on a research trip to the National Archives military repository in College Park, Md.

Mabb contacted his congresswoman, who recommended DOD reconsider a medal of valor for Sabo.

“The Leslie I know would give his life to anybody,” she said. “He would. He would give you the shirt off his back. That’s the kind of man he was.”