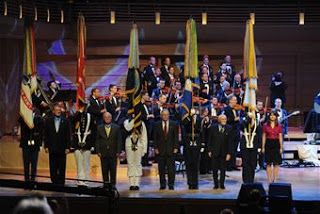 America’s Veterans: A Musical Tribute, is a star-studded program honoring America’s bravest, will air on Public Television in November, 2011. (Click for air time dates in your area).

The program features Country music sensation Jo Dee Messina, Irish tenor Ronan Tynan, legendary jazz trumpeter Arturo Sandoval and “So You Think You Can Dance” Season 3 winner Sabra Johnson, accompanied by the Air Force Studio Orchestra. This one-hour patriotic special is a thrilling and memorable tribute to veterans of all services. It also tells the stories of veteran heroes: