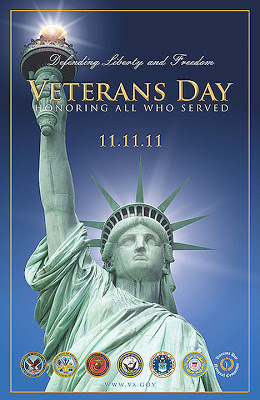 On the 11th hour of the 11th day of the 11th month of 1918, an armistice, or temporary cessation of hostilities, was declared between the Allied nations and Germany in the First World War, then known as “the Great War.” Commemorated as Armistice Day beginning the following year, November 11th became a legal federal holiday in the United States in 1938. In the aftermath of World War II and the Korean War, Armistice Day became Veterans Day, a holiday dedicated to American veterans of all wars.

“In November 1919, President Wilson proclaimed November 11 as the first commemoration of Armistice Day with the following words: “To us in America, the reflections of Armistice Day will be filled with solemn pride in the heroism of those who died in the country’s service and with gratitude for the victory, both because of the thing from which it has freed us and because of the opportunity it has given America to show her sympathy with peace and justice in the councils of the nations…”

The original concept for the celebration was for a day observed with parades and public meetings and a brief suspension of business beginning at 11:00 a.m.” Department of Veteran Affairs

Veterans Day is not to be confused with Memorial Day–a common misunderstanding, according to the U.S. Department of Veterans Affairs. Memorial Day (the fourth Monday in May) honors American service members who died in service to their country or as a result of injuries incurred during battle, while Veterans Day pays tribute to all American veterans–living or dead–but especially gives thanks to living veterans who served their country honorably during war or peacetime.

A patriotic ceremony honoring America’s military members and Veterans is scheduled for Friday, November 11, 2011, at 11 a.m., in Arlington National Cemetery. A wreath-laying ceremony will take place at the Tomb of the Unknowns, followed by a ceremony inside the Memorial Amphitheater, adjacent to the Tomb. The event will commence with a prelude concert by the United States Army Band “Pershing’s Own” at 10:00 a.m., inside the amphitheater. The ceremony is intended to honor and thank all who served in the United States Armed Forces.

The Veterans Day National Committee also selects a number of regional sites for Veterans Day observances throughout the country. From stirring parades and ceremonies to military exhibits and tributes to distinguished veterans, these events serve as models for other communities to follow in planning their own observances.

A 35 page pdf from the Department of Veteran Affairs complete with student and teacher resources, kid’s pack.

This website from the Department of Veterans Affairs offers lesson plans and a teacher’s guide for Veterans Day, and Patriotism.

Also, don’t forget to check out our section of Educational Resources about Medal of Honor recipients !