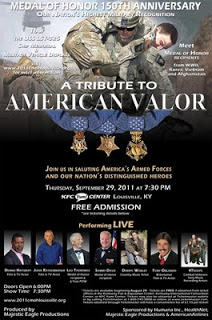 The 2011 Louisville Medal of Honor Convention will present, “A Tribute to American Valor,” a patriotic variety show honoring our nation’s armed forces on Thursday, Sept. 29. The event is scheduled to begin at 7:30 p.m., will honor troops, veterans and their families while showcasing more than 350 performers. “A Tribute to American Valor” is free of charge and open to the general public, however a ticket is required for entrance.

Medal of Honor stories and unrivaled performances from Medal of Honor recipients Leo Thorsness, 6 year Vietnam War POW and SFC Sammy Davis, who shares an amazing and very moving story about his time in Vietnam and Dakota Meyer, (Afghanistan) who will receive the Medal of Honor on September 15th, 2011.

The show will be hosted by Oscar-nominee John Ratzenberger, best known for his roles in Cheers, Superman, The Empire Strikes Back and all of the Pixar films Toy Story, A Bug’s Life, Monsters, Inc., Finding Nemo, The Incredibles, Cars, Ratatouille, WALL-E, and Up. Also taking the stage for the evening are TV actor Dennis Haysbert, country music sensation Darryl Worley, Grammy nominated and Entertainer of the Year Tony Orlando, singer Steve Amerson, combat veterans and Sony Music Recording Artists 4Troops.

All troops, veterans, and their families will be recognized and honored. This is a time for everyone to come together to meet our living Medal of Honor recipients. The tribute will be broadcast live to our troops in Afghanistan, Iraq, and throughout the world, on The Pentagon Channel at www.pentagonchannel.com.

Tickets are available beginning August 29, 2011. Tickets are FREE if obtained from ticket offices at the Kentucky Fair & Exposition Center, Kentucky International Convention Center, or KFC Yum! Center. Tickets may also be obtained at Ticketmaster outlets, or by calling Ticketmaster at 1-800-745-3000 or online at http://www.ticketmaster.com/. Tickets obtained through Ticketmaster will have a convenience fee of $1.75 per ticket.

For more information on the 2011 Medal of Honor Convention including “A Tribute to American Valor,” visit www.2011cmohlouisville.org