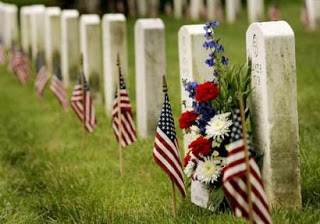 On Memorial Day, men and women across the nation pause to remember America’s fallen soldiers who have made the ultimate sacrifice for the sake of protecting American freedom.

Originally known as “Decoration Day,” Memorial Day came into existence just three years after the Civil War ended. Decoration Day was intended as a time to remember the soldiers who lost their lives during the Civil War and more specifically, to honor their memory by decorating their graves.

On May 5, 1868, Gen. John A. Logan of the Grand Army of the Republic declared the first Decoration Day to be held on May 30, 1868. As part of the day’s observances, flowers were placed on the graves of Union and Confederate soldiers buried at Arlington National Cemetery.

He asked that America remember those lost in the Civil War by ‘gathering around their sacred remains’ to ‘garland the passionless mounds … with choicest flowers’ and ‘raise above them the dear old flag they saved.’

By the late 1800s, as the holiday grew in popularity and was observed by more states, Decoration Day had become better known as Memorial Day. But it wasn’t until the end of World War I that Memorial Day was opened to include fallen soldiers who fought in all U.S. wars.

In 1971, Congress declared Memorial Day a national holiday and designated the last Monday in May as the official day of observance. And every year on that date, U.S. defense leaders, members of Congress and citizens return to Arlington National Cemetery to pay their respects to the men and women who have given their lives for our country. Dignitaries watch as the 3rd Infantry leads the Memorial Day ceremonies, which include wreath-laying at the Tomb of the Unknown Soldier.

“Some wear a red poppy, in the spirit of the poet Moina Michael, who wrote that that flower “grows on fields where valor led.” Others continue to adorn graves with flowers and candles. And each year, the soldiers of “The Old Guard” place small American flags at each Arlington National Cemetery gravestone and patrol around the clock during Memorial Day weekend to ensure that each flag remains standing.

Let no neglect, no ravages of time, testify to the present or to the coming generations that we have forgotten as a people the cost of a free and undivided republic.’ Gen. Logan