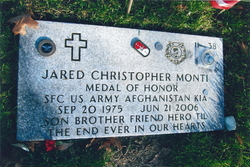 Paul Monti, father of Medal of Honor recipient Jared Monti, led an effort to place 50,000 American flags at graves in the Massachusetts National Cemetery in Bourne. Monti said the initiative comes after a four-year effort to get permission for flag placement at the site, with an agreement that the flags will be placed for one-week periods coinciding with Memorial Day and Veterans Day.

“Basically, this is about doing the right thing for your veterans,” said Monti, explaining that authorization for flag placement was secured about a month ago.
“They fought for you, they fought for the freedom of this country and our way of life,” he said. “The least we can do is honor them with a flag.”

The Flags for Vets campaign started when Monti went to visit his son’s grave and saw there were no flags on the graves. Management said it was difficult to maintain the cemetery. But he contacted political leaders at the national level and the flags can now be placed on Memorial Day and Veterans Day provided they are removed a week later.

2,000 volunteers planted those flags at the Massachusetts National Cemetery this weekend.

“I’m hoping that this will catch on nationwide,” said Monti, who was inspired by similar efforts. “I know there are national cemeteries that do the same thing. I hope some other people will step up in their area and do the same thing in their cemetery.

“My message about my son is just to have people do the right thing,” Monti said. “That’s what my son did. That’s the message I carry everywhere. This is the right thing.”