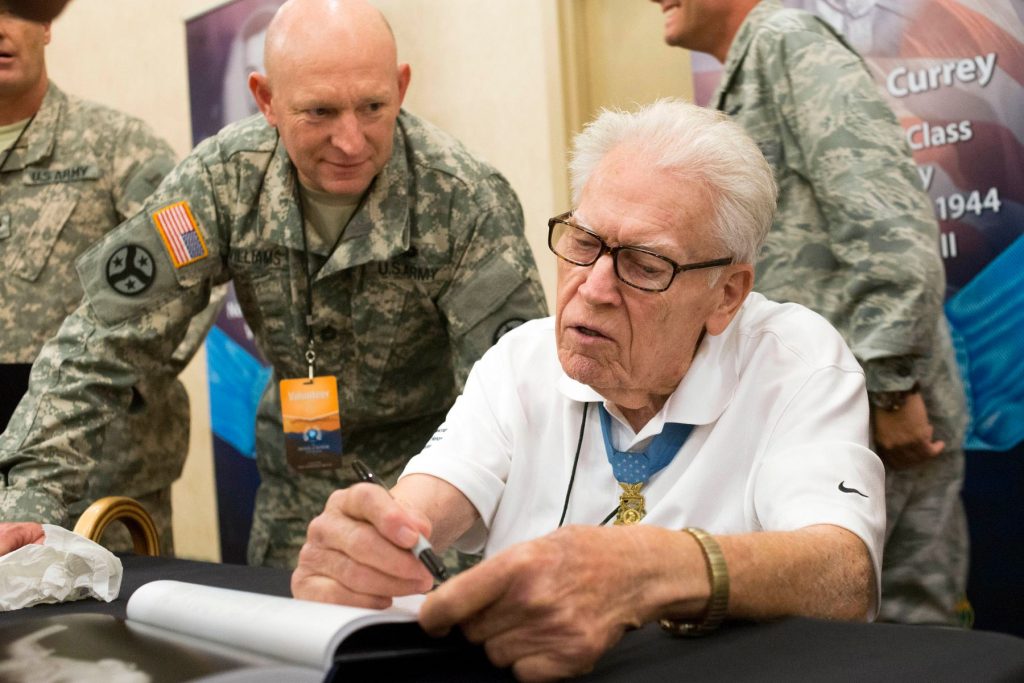 “Francis S. Currey was a true American hero who made great personal sacrifices to serve his country during World War II,” New York Gov. Andrew M. Cuomo said in his announcement of the lowering of state flags to half-staff Oct. 11.

“His significant contributions during the Battle of the Bulge and beyond helped to defeat fascism during the war, and he continued to serve his country after returning home to New York through his work with veterans,” Cuomo said.

For members of the New York Military Forces Honor Guard, funeral honors each year approach 10,000 ceremonies across the state. But rendering honors to a Medal of Honor recipient is very different emotionally, said 1st Lt. Lasheri Mayes, the officer in charge of the honor guard detachment.

“It is a privilege that our Honor Guard had the opportunity to render honors to Sgt. Frances Currey,” Mayes said. “Reading about his courageous and decisive action made it very clear to me the reasons he is regarded as a hero.”

“Although we perform military funeral honors each day, this service was truly special. It was amazing to see so many people here to celebrate a humble man who led such an honorable life,” she said.

He landed at Omaha Beach in July 1944, a few weeks after D-Day and his 19th birthday, as a replacement for the tremendous losses within the ranks of infantry divisions.

He was assigned to 3rd Platoon, K Company, 120th Infantry Regiment, 30th Infantry Division, and joined his unit for the breakout from Normandy, pursuing German forces through France, Belgium and Holland.

By Dec. 21, Currey was an automatic rifleman in a rifle squad guarding a bridge crossing and strongpoint near Malmedy, Belgium. Currey and his division were fighting to hold off the final German counteroffensive of the war, the Battle of the Bulge.

During the action, he continuously exposed himself to the enemy, employing a bazooka, antitank grenades, his automatic rifle and two machine guns, causing four enemy tank crews to abandon their tanks and enabling him to rescue five Soldiers pinned down by the enemy fire.

His medal citation reads, “Realizing that they could not escape until the enemy tank and infantry guns had been silenced, Sgt. Currey crossed the street to a vehicle, where he procured an armful of antitank grenades. These he launched while under heavy enemy fire, driving the tankmen from the vehicles into the house. He then climbed onto a half-track in full view of the Germans and fired a machinegun at the house. Once again changing his position, he manned another machinegun whose crew had been killed; under his covering fire the five Soldiers were able to retire to safety. Deprived of tanks and with heavy infantry casualties, the enemy was forced to withdraw.”

His lesson for Soldiers today, he said in his oral history for the World War II Museum, is to take all the training you can and make sure you know how to operate every weapon. You may find yourself needing them, Currey said.

In early 1945, after the battle, Currey became a squad leader, then platoon sergeant and received a promotion to technical sergeant.

Returning home to upstate New York, Currey worked as a counselor at the Stratton VA Medical Center in Albany for some 30 years.

In addition to his military honors, Currey received special recognition from the Hasbro Toy Company.

Hasbro, the maker of the G.I. Joe action figure modeled a special figure in 1998 after Currey as part of the action figure Classic Collection Medal of Honor Series. The figure depicts the 19-year-old Currey, with toy replicas of the M1 rifle, Browning Automatic Rifle and bazooka that Currey used in battle. Some 100,000 figures were produced.

“My wife says it’s a pretty good likeness,” Currey told a reporter in 1998.

The New York State Senate inducted Currey into the state Veterans’ Hall of Fame in 2006 and Albany County honored him as a living veteran in 2013.

Also in 2013, an outside mural of the Sullivan Country Museum in Hurleyville depicts Currey as a living Medal of Honor recipient.

In November 2013, Currey’s photo was one of 12 Medal of Honor recipients on the cover sheet of a U.S. Postal Service “World War II Medal of Honor Forever Stamp.”

“On behalf of all New Yorkers, I extend our sympathy to his friends and family and express our sincerest gratitude for his service, bravery and accomplishments,” Cuomo said.