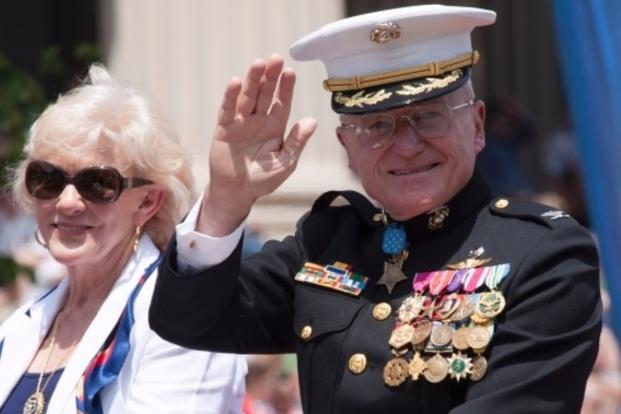 WASHINGTON — Marine Corps Col. Wesley Fox, who received the Medal of Honor for successfully leading his company through an enemy attack during the Vietnam War and retired decades later at the mandatory age of 62, died the evening of Nov. 24 in Blacksburg, Va. He was 86.

The Congressional Medal of Honor Society confirmed his death Monday but did not provide a cause.

As a boy growing up in rural northern Virginia and watching his older cousins leave to fight in World War II, Fox always planned to join the military, he said in an interview preserved by the Library of Congress. He left his family farm near Herndon and enlisted in the Marine Corps in 1950 at the start of the Korean War.

Fox served as a young corporal in Korea and later, as a first lieutenant, led a company in Vietnam that would suffer 75 percent casualties during a three-month operation. The unit, Company A, 9th Marines, was among the troops fighting in Operation Dewey Canyon, the last major Marine offensive during the Vietnam War.

The company came under intense gunfire from the North Vietnamese on Feb. 22, 1969, which Fox remembered as a foggy, rainy day in the jungle of the northern A Shau Valley. Realizing they wouldn’t be able to move the injured men and retreat, Fox led an assault against the larger enemy force. Though Fox was wounded, he refused medical attention and successfully directed the responding attack, coordinated air support, and then supervised the medical evacuation of injured and dead Marines.

“His indomitable courage, inspiring initiative and unwavering devotion to duty in the face of grave personal danger inspired his Marines to such aggressive action that they overcame all enemy resistance and destroyed a large bunker complex,” read Fox’s citation for the Medal of Honor.

Former President Richard Nixon presented the Medal of Honor, the military’s highest award for valor, to Fox on March 2, 1971. Fox and six soldiers received the distinction in a group ceremony at the White House.

In the interview for the Library of Congress’s Veterans History Project, Fox reflected on the attack and recalled one brief moment when he had to motivate his men: “I had the opportunity to look ’em in the eyeballs and say, ‘This is what we do.'”

“Why did my Marines go forward? Cause they knew that’s what I wanted of ’em,” Fox said. “They knew we were moving to the sounds of the enemy’s guns, and until somebody told ’em something clearly, differently, a Marine isn’t going to lose his focus. I had some great Marines.”

Fox went on to serve 43 years in the Marine Corps and left only when he hit the mandatory retirement age of 62 in 1993. He worked his way up through every enlisted rank from private to colonel.

For eight years after that, he worked as a deputy commandant of cadets for the Virginia Tech Corps of Cadets and continued to speak about his military service to students and civic leaders.

Fox is survived by his wife, Dottie Lu, and other family.

In an announcement Monday, the Marine Corps called Fox a “legend” and a “true Marine’s Marine.”

Fox, who always wanted to join the military, told the Veterans History Project interviewer that he had no regrets about choosing a career in the Marine Corps.

“To tell you how proud I am to wear the Marine uniform, my first four years as a Marine I didn’t own one stitch of civilian clothes — everything I did was in a Marine uniform,” Fox said. “I’d go home on leave, working in the hay fields or whatever, I wore my Marine utilities. Go in town to see the movies, I wore Marine dress.”

Fox was also proud to wear the Medal of Honor, he said.

“I’m pleased and proud to wear it for the Marine Corps and for what my Marines did on that particular fight,” Fox told the interviewer. “I feel a little bit of an emptiness in knowing that there were others deserved in that fight that were not awarded.”