The home will be named for Medal of Honor recipient  Ardie R. Copas, who was killed in action in Cambodia, on May 12, 1970.  He was born in Fort Pierce, Florida

According to Steve Murray, Director of Communications of the Florida Department of Veterans Affairs, “the home would be the first state veterans home to offer all private rooms. Spouses including those of the same sex, will be allowed to share rooms as long as both are military veterans and need services.”

President Obama, on March 18, 2014, awarded the Medal of Honor posthumously, at a ceremony at the White House 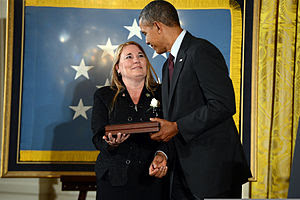 COPAS’ DAUGHTER, SHYRELL JEAN COPAS ,
RECEIVES THE MEDAL OF HONOR
FROM PRESIDENT OBAMA
ON MARCH 18, 2014, AT THE WHITE HOUSE

Specialist Four Ardie R. Copas distinguished himself by acts of gallantry and intrepidity above and beyond the call of duty while serving as a Machinegunner in Company C, 1st Battalion (Mechanized), 5th Infantry Regiment, 25th Infantry Division during combat operations against an armed enemy near Ph Romeas Hek, Cambodia on May 12, 1970. That morning, Specialist Four Copas’ company was suddenly attacked by a large hostile force firing recoilless rifles, rocket-propelled grenades, and automatic weapons. As Specialist Four Copas began returning fire, his armored car was struck by an enemy recoilless round, knocking him to the ground and injuring four American Soldiers beside the vehicle. Ignoring his own wounds, Specialist Four Copas quickly remounted the burning vehicle and commenced firing his machinegun at the belligerents. Braving the hostile fire directed at him and the possible detonation of the mortar rounds inside the track, Specialist Four Copas maintained a heavy volume of suppressive fire on the foe while the wounded Americans were safely evacuated. Undaunted, Specialist Four Copas continued to place devastating volleys of fire upon the adversary until he was mortally wounded when another enemy round hit his vehicle. Specialist Four Copas’ daring action resulted in the safe evacuation of his comrades. Specialist Four Copas’ extraordinary heroism and selflessness at the cost of his own life, above and beyond the call of duty, are in keeping with the highest traditions of military service and reflect great credit upon himself, his unit and the United States Army.