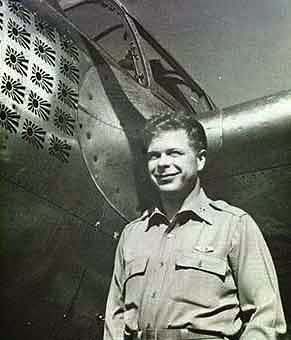 A RECIPIENT OF THE MEDAL OF HONOR  FOR HIS HEROISM DURING WORLD WAR II, WAS RECENTLY HONORED BY THE  WISCONSIN AVIATION HALL OF FAME.

BONG A FIGHTER PILOT FROM WISCONSIN WAS CREDITED WITH SHOOTING DOWN 40 JAPANESE PLANES.  HE BECOME AMERICA’S ALL-TIME ACE OF ACES, WHILE FLYING A P-38 FIGHTER PLANES

In 1944,  Bong was awarded the nation’s highest honor by General Douglas MacArthur, Commander of all U.S. Army units in the Far East, who said: “Major Richard Ira Bong, who has ruled the air from New Guinea to the Philippines, I now induct you into the society of the bravest of brave, the wearers of the Congressional Medal of Honor of the United States.”

After his service, Richard Bong became a test pilot for the P-80 Shooting Star. On, August 6, 1945 – the day the atomic bomb was dropped on Hiroshima – Bong’s P-80 malfunctioned shortly after take-off. Before attempting bailout, Bong is said to have first steered the aircraft clear of a residential area. Because of his close proximity to the ground, it was reported he never had a chance. Richard Bong, the United States highest scoring air ace of WWII, was killed.

For conspicuous gallantry and intrepidity in action above and beyond the call of duty in the Southwest Pacific area from 10 October to 15 November 1944. Though assigned to duty as gunnery instructor and neither required nor expected to perform combat duty, Maj. Bong voluntarily and at his own urgent request engaged in repeated combat missions, including unusually hazardous sorties over Balikpapan, Borneo, and in the Leyte area of the Philippines. His aggressiveness and daring resulted in his shooting down 8 enemy airplanes during this period.