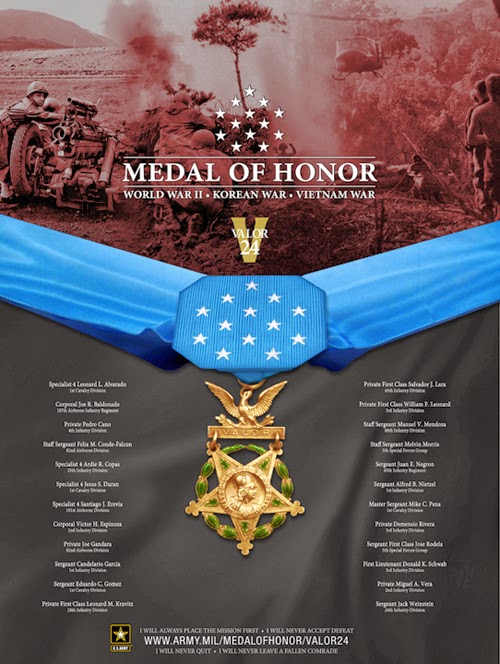 Pvt. Demensio Rivera will receive the Medal of Honor
posthumously for his courageous actions while serving as an automatic
rifleman with 2d Platoon, Company G, 7th Infantry Regiment, 3d Infantry
Division during combat operations against an armed enemy in
Changyong-ni, Korea on May 23, 1951.

The Distinguished Service Cross is presented to Demensio Rivera
(RA12346464), Private First Class, U.S. Army, for extraordinary heroism
in connection with military operations against an armed enemy of the
United Nations while serving with Company G, 2d Battalion, 7th Infantry
Regiment, 3d Infantry Division. Private First Class Rivera distinguished
himself by extraordinary heroism in action against enemy aggressor
forces at Changyong-ni, Korea, on 22 and 23 May 1951. When the outpost
area occupied by his platoon was assaulted during the night, Private
Rivera, an automatic rifleman, held his forward position tenaciously,
although exposed to very heavy fire. With his automatic rifle, he
delivered a continuous and devastating fire at the approaching enemy
until this weapon became inoperative, whereupon he employed his pistol
and grenades and stopped the enemy within a few feet of his position.
During a renewed attack, he fought the enemy hand-to-hand and forced
them back. Finally, as an overwhelming number of the enemy closed in on
him, he killed four of them with his only remaining grenade, although
they were in such close proximity he was severely wounded by the same
explosion, When is position was retaken, he was recovered, seriously
wounded, and lying with the bodies of the four enemy dead or dying.
Private Rivera’s fearless performance was a major factor in successfully
repulsing the enemy’s attacks. His unflinching courage and devotion to
duty uphold the finest traditions of the military service