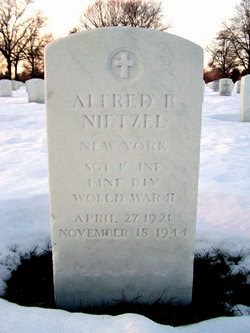 Sgt. Alfred B. Nietzel will receive the Medal of Honor
posthumously for his courageous actions while serving as a section
leader for Company H, 16th Infantry Regiment, 1st Infantry Division
during combat operations against an armed enemy in Heistern, Germany on
November 18, 1944.

Nietzel
is being recognized for his valorous actions in Heistern, Germany, Nov.
18, 1944. When an enemy assault threatened to overrun his unit’s
position, Nietzel selflessly covered for the retreating members of his
squad, expending all his ammunition and holding his post until he was
killed by an enemy hand grenade.

Citation
Sergeant Alfred B. Nietzel (ASN: 12018923), United States Army, was
awarded the Distinguished Service Cross (Posthumously) for extraordinary
heroism in connection with military operations against an armed enemy
while serving with Company H, 2d Battalion, 16th Infantry Regiment, 1st
Infantry Division, in action against enemy forces on 18 November 1944.
Sergeant Nietzel’s intrepid actions, personal bravery and zealous
devotion to duty at the cost of his life, exemplify the highest
traditions of the military forces of the United States and reflect great
credit upon himself, the 1st Infantry Division, and the United States
Army.