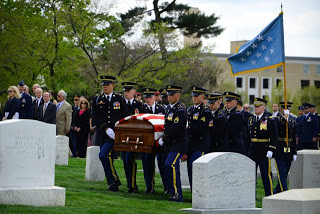 But it would take decades and a lot of help from other Soldiers and
Defense civilians before his remains were finally recovered in North
Korea and identified. Only then could his family finally have the
closure they so desperately wanted.

Some of the fiercest fighting of the war took place in the vicinity of a
place called Chosin Reservoir in North Korea in November and December
1950. That’s where Faith and his battalion were when the Chinese decided
to enter the war. The Chinese sent thousands of troops south across the
Yalu River into Korea.

The entry of China into the war and their drive south into Korea
surprised the Americans who were quickly outnumbered and outgunned.

“Although physically exhausted in the bitter cold, (he) organized and
launched an attack which was soon stopped by enemy fire,” the citation
reads. “He ran forward under enemy small-arms and automatic weapons
fire, got his men on their feet and personally led the fire attack as it
blasted its way through the enemy ring.

“As they came to a hairpin curve, enemy fire from a roadblock again
pinned the column down. Lt. Col. Faith organized a group of men and
directed their attack on the enemy positions on the right flank. He then
placed himself at the head of another group of men and in the face of
direct enemy fire led an attack on the enemy roadblock, firing his
pistol and throwing grenades.

“When he had reached a position approximately 30 yards from the
roadblock, he was mortally wounded, but continued to direct the attack
until the roadblock was overrun.

“Throughout the five days of action Lt. Col. Faith gave no thought to
his safety and did not spare himself. His presence each time in the
position of greatest danger was an inspiration to his men. Also, the
damage he personally inflicted firing from his position at the head of
his men was of material assistance on several occasions. …”
Faith’s Medal of Honor citation describes the action he took during this
attack, noting that he “personally led counterattacks to restore (the
battalion’s) position” and link up with other units, as they’d been
disbursed by the enemy’s “fanatical attack.”