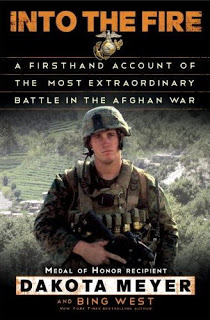 Medal of Honor recipient Dakota Meyer’s new book is scheduled to be released
in September, three years after the devastating battle that led to his heroic
actions.

“Into the Fire: A Firsthand Account of the Most Extraordinary Battle in the
Afghan War” will be available Sept. 25,

according to its listing on Amazon.com.

The 272-page book is written by
Meyer and Bing West, a Marine veteran who has authored several best-selling
works. It will be published by Random House, which also has it

cover image of the book shows Meyer in Afghanistan in 2009, wearing full
battle rattle with an Afghan landscape behind him. The work is described this
way on Amazon:

In September of 2009, several hundred Taliban
ambushed a company of Afghan soldiers and their Marine advisors. The enemy had
the company pinned down, with only one exposed road leading in and out of the
village. Twenty-one-year-old Marine Corporal Dakota Meyer disobeyed his
commanding officer and took command. Without reinforcements or artillery
support, he charged forward down the only road five times under withering fire.
He killed a dozen Taliban and rescued 18 Afghans and Americans. The company
finally rallied and the enemy pulled back. When the story finally became known,
Dakota was awarded the Medal of Honor, the United States highest honour. Yet the
story of that day remains mired in controversy even now. For a man to charge
into fire once requires grit; to do so five times is beyond comprehension.
Dakota’s performance was the greatest act of
courage in the war, because he repeated it and repeated it. In this fast-paced
narrative of non-stop action, we hear the story from Dakota’s own perspective,
and come to know our narrator as a true American hero: a young man raised on a
cattle farm in Kentucky with uncompromising morals and a fierce determination to
do what’s right.

The numbers of individuals saved and killed were

later called into question in a report by McClatchy journalist Jonathan
Landay, who was embedded with the unit ambushed that day. It seems likely that
the publication of this book would seek to set the record straight.
We’ll be paying close attention to the details in the book here at Marine
Corps Times. Since 2009, we’ve published four cover stories heavily influenced
by the Battle of Ganjgal.