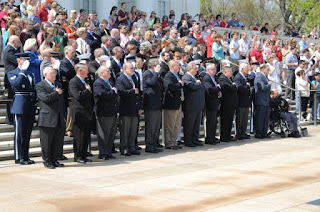 This weekend marks the annual National Medal of Honor Day to recognize the men and women given the highest military honor awarded by Congress.

It is the 151th anniversary of the establishment of the Medal of Honor, which President Abraham Lincoln signed into law in 1861. The Medal of Honor is the highest award for valor in action against an enemy force which can be bestowed upon an individual serving in the Armed Services of the United States.

This week, 16 of the 82 living recipients were at Arlington National Cemetery’s wreath-laying to recognize Medal of Honor recipients

“These men exemplify the ideals of courage, patriotism and service by distingushing themselves during the chaos of battle,” says David McIntyre, president of the Congressional Medal of Honor Foundation.

“We would just like for you to know that we didn’t do our country any honors by our service,” says Patrick Brady, a Medal of Honor recipient. “God did us a favor by allowing us to be born in this country.”

On Friday, March 23, 2012 at 2:15 p.m. was the Medal of Honor Day Wreath Laying Ceremony at the Tomb of the Unknowns and at 2:30 p.m. was the Citizen Service Before Self Honors Ceremony.

The Congressional Medal of Honor Foundation hosted its fifth annual Citizen Service Before Self Honors ceremony to recognize nationally and honor three recipients: James McCormick of New Haven, W.Va.; Montel Mixon of Saint Paul, Minn.; and, Brandon Wemhoff of Lincoln, Neb. The recipients represent the values of courage, sacrifice and selfless service. At the ceremony, the Foundation presented the American Spirit Award to Spencer Zimmerman, a 15-year-old Boy Scout from Phoenix, Ariz. for his extraordinary initiative and selflessness.