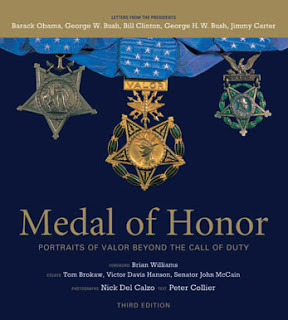 To celebrate the release of the third edition of Medal of Honor: Portraits of Valor Beyond the Call of Duty, two of the Medal of Honor recipients profiled in the book will visit the Pritzker Military Library.

In 1966, Jack Jacobs finished school at Rutgers and, with plans to attend law school in the future, needed a steady paycheck to support his wife and young daughter. Two years later, 1st Lt. Jacobs was an adviser to a South Vietnamese infantry battalion in the Mekong Delta. They were searching for a group of Vietcong when the tables were suddenly, violently turned; in a devastating firestorm, the battalion’s commander was badly wounded, and their defenses were thrown into chaos. Although badly hurt as well and barely able to see, Jacobs took command and withdrew the unit to safety. He returned to the scene of the attack several times, as intense fire continued around him, to rescue the wounded and perform first aid. That day, he saved the lives of thirteen soldiers and another adviser, and stopped only when he was no longer capable of moving; the extremity of his wounds was such that he would never regain his senses of taste or smell.

Jacobs received the Medal of Honor in 1969. After finishing graduate school, he returned to Vietnam for another tour of duty, during which he walked away unscathed from a helicopter crash. Over the course of more than twenty years of service, Jacobs also earned three Bronze Stars and two Silver Stars. Today, he is an analyst for NBC/MSNBC News. The title of his Colby Award-winning memoir, If Not Now, When?, comes from a line of Jewish philosophy that ran through his mind on that fateful day in 1968.

On December 15th, 1967, Illinois native Allen J. Lynch and the rest of his platoon were on their way back for a well-deserved rest when they were called in to support another company that had been outnumbered by an enemy force. Under intense fire, Lynch carried three wounded soldiers to safety, and single-handedly defended them against the advancing enemy force for several hours.

His quick-thinking and disregard for his own safety were vital in saving those lives, but his fight on behalf of his fellow soldiers did not end on the battlefield. After leaving active duty, Lynch worked for several years in the Veterans Administration, advocating for increased benefits for disabled veterans, and served most recently as chief of the Veterans Rights Bureau for the Illinois Attorney General’s Office. Now retired, he continues that commitment as a volunteer with the Vietnam Veterans of America and does ministry work with the Lake County Jail.

For more details and reservations visit the Pritzker Military Library