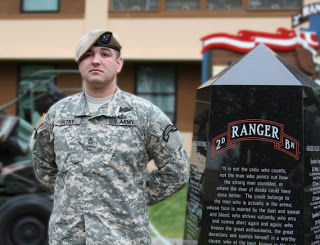 Last week it was announced that Army Sgt. 1st Class Leroy Arthur Petry would soon receive the Medal of Honor. Although there have been nine recipients of this award from the wars in Iraq and Afghanistan, Petry is only the second to have survived the combat action that earned him America’s highest award for combat heroism.

During the combat action, Petry was shot through both legs. Fighting off the pain, he continued to engage a determined and aggressive enemy in an intense firefight. A live enemy grenade landed near two of Petry’s fellow soldiers. Rather than diving for cover, Petry, ignoring his wounds, grabbed the grenade and tossed it away in order to protect his comrades-in-arms. As the grenade was leaving his hand, it exploded, blowing off Petry’s right hand and causing other injuries. His quick and heroic action prevented the injury and possible death of his two buddies.

Leroy Arthur Petry was born on July 29, 1979. He is a native of Santé Fe, New Mexico and enlisted in the United States Army in September 1999. He attended Basic Training and Advanced Individual Training at Fort Benning, Georgia. Sergeant First Class Petry is currently assigned to the 75th Ranger Regiment and attached to Special Operations Command (SOCOM) with duty at Joint Base Lewis McChord as a liaison for the SOCOM Care Coalition where he tracks and monitors injured Rangers returning from the Theater of Operations to the initial place of care to home station care.