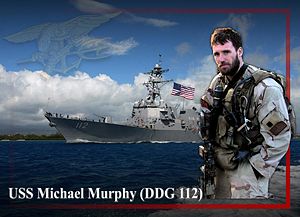 Chief of Naval Operations Adm. Gary Roughead will deliver the ceremony’s principal address. Maureen Murphy will serve as sponsor of the ship named for her late son. In accordance with Navy tradition, she will break a bottle of champagne across the ship’s bow to formally christen the ship.

Murphy led a four-man team tasked with finding a key Taliban leader in the mountainous terrain near Asadabad, Afghanistan, when they came under fire from a much larger enemy force with superior tactical position. Mortally wounded while exposing himself to enemy fire, Murphy knowingly left his position of cover to get a clear signal in order to communicate with his headquarters. While being shot at repeatedly, Murphy calmly provided his unit’s location and requested immediate support for his element. He returned to his cover position to continue the fight until finally succumbing to his wounds.

On October 22, 2007 the Medal of Honor presentation ceremony was held at the White House. President George W. Bush presented Murphy’s Medal of Honor to his parents 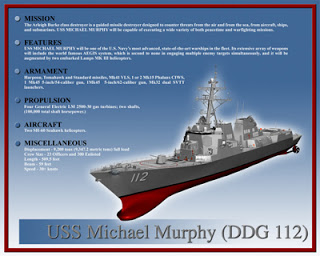 Designated DDG 112, Michael Murphy, the 62nd Arleigh Burke-class destroyer, will be able to conduct a variety of operations, from peacetime presence and crisis management to sea control and power projection. Michael Murphy will be capable of fighting air, surface and subsurface battles simultaneously and will contain a myriad of offensive and defensive weapons designed to support maritime warfare in keeping with “A Cooperative Strategy for 21st Century Seapower.”

Cmdr. Thomas E. Shultz, a native of El Cajon, Calif., is the prospective commanding officer of the ship and will lead the crew of 279 officers and enlisted personnel. The 9,200-ton Michael Murphy is being built by General Dynamics Bath Iron Works. The ship is 509 feet in length, has a waterline beam of 59 feet, and a navigational draft of 31 feet. Four gas turbine engines will power the ship to speeds in excess of 30 knots. U.S. Department of Defense

On June 18, 2010, Maureen Murphy and Edwin Bard inscribed the signatures of Murphy’s family on an iron plate during a dedication ceremony for Pre-Commissioning Unit (PCU) Michael Murphy.

In honor of the christening of the USS Michael Murphy: #1 Amazon bestseller Seal of Honor