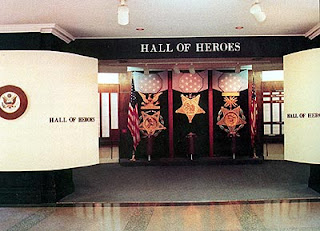 The Congressional Medal of Honor Foundation and Society today on Medal of Honor Day launched the 150th Anniversary of the Medal of Honor with a formal ceremony at the Hall of Heroes in the Pentagon. Admiral Mike G. Mullen, USN, Chairman of the Joint Chiefs of Staff, hosted the ceremony. A select group of nearly 100 attended the historic ceremony, including senior military and spouses, civilian leaders, Pentagon officials, and more than 30 Medal of Honor recipients—those bestowed our nation’s highest award for military valor.

This year marks the 150th anniversary of the establishment of the Medal of Honor, which President Abraham Lincoln signed into law in 1861. This monumental anniversary represents 150 years of courage and sacrifice on the part of the millions of men and women who have defended our freedoms in uniform. Throughout the year, the Congressional Medal of Honor Society and Foundation will host a series of events to celebrate and educate Americans about the Medal’s history, ideals and significance.