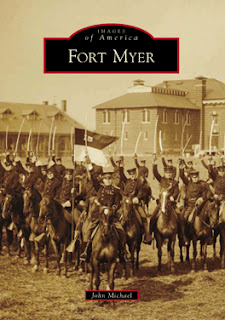 Though Fort Myer is a small US Army post, adjacent the Arlington National Cemetery in Virginia, across the Potomac River overlooking Washington, D.C ; it was home to many great Medal of Honor recipients and generals like Eisenhower, MacArthur and Bradley .

Author John Michael, a military historian and photographer, world renowned for his photographs of final honors at Arlington National Cemetery has dug back in time and sifted through thousands of photographs in many collections in order to “preserve the memory” of this national landmark’s first 100 years, in his new book, Images of America – Fort Myer “Preserving the memories so others will remember.”

Fort Myer was built in 1863 during the American Civil War. It was the site of the first flight of an aircraft at a military installation; even Orville Wright flew some exhibitions there. During World War I it was a staging area for many regiments and where French officers taught Americans about trench warfare.

Among Fort Myer’s legacy are four Medal of Honor recipients that served at Fort Myer at one time or another:

Brigadier General Guy V. Henry Sr. was a Post Commander of Fort Myer. He received the Medal of Honor on December 5, 1893

“On June 1, 1864,General Grant launched a fierce assault at Cold Harbor, Virginia, against the well entrenched and fortified Confederate forces under General Lee. On the first day of the battle at Cold Harbor, Colonel Guy Henry led the assaults of his brigade against the enemy’s works, despite having his horse shot out from under him two times. He was one of eight men awarded the Medal of Honor for heroism on the first day of battle.”

Major General Leonard Wood was named Army Chief of Staff in 1910 by President Taft; he remains the only medical officer to have ever held that position.

“An 1883 Harvard Medical School graduate, he joined the Army as a contract physician. Taking part in the 1886 Geronimo expedition, he received the Medal of Honor for a heroic trek to obtain supplies and reinforcements. Wood commanded the 1st US Volunteer Cavalry Regiment (Rough Riders) during the Spanish-American War, with Theodore Roosevelt as second in command.”

He received the Medal of Honor as Ccommander of Allied forces in the Philippines at the time of their surrender to the Empire of Japan during World War II. “The final stand on beleaguered Corregidor, for which he was in an important measure personally responsible, commanded the admiration of the Nation’s allies. It reflected the high morale of American arms in the face of overwhelming odds. His courage and resolution were a vitally needed inspiration to the then sorely pressed freedom-loving peoples of the world.”

General of the Army Douglas MacArthur was a Chief of Staff of the United States Army during the 1930s and lived in Quarters One on Fort Myer.

He played a prominent role in the Pacific theater during World War II. He received the Medal of Honor for his service in the Philippines Campaign. Arthur MacArthur, Jr., and Douglas MacArthur were the first father and son to each be awarded the medal.

Until now, little has been written about this US Army post noted for so many accomplishments and people that have had so much impact on the United States and the world.

John Michael’s book, Images of America – Fort Myer will be available on June 13, 2011 from Arcadia Publishing.

For information on the Collector’s Edition and pre-order please visit the Images of America- Fort Myer website.