Representatives saluted the World War II veteran in the presence of two fellow Medal of Honor recipients — retired Col. Donald Ballard and retired Col. Roger Donlon. Both received the nation’s most distinguished medal for bravery in combat while fighting in Vietnam.

During the 7 December 1941 Japanese air raid on Pearl Harbor, Ross was serving on board USS Nevada (BB-36). When the ship was badly damaged by bombs and torpedoes, he kept the dynamo rooms operating until he was overpowered by smoke, steam, heat and exhaustion. For his courageous conduct, Machinist Ross was awarded the Medal of Honor.

“When his station in the forward dynamo room became almost untenable due to smoke, steam and heat,” reads Ross’ citation, “he forced his men to leave that station and performed all the duties himself until blinded and unconscious. Upon being rescued and resuscitated, he returned and secured the forward dynamo room and proceeded to the after dynamo room, where he was later again rendered unconscious by exhaustion. Upon recovering consciousness, he returned to his station, where he remained until directed to abandon it.”

The 47-mile section of K-18 to be named in memory of Ross runs from north of Salina to the west.

Donald Everett Ballard is an American colonel in the Kansas National Guard and former member of the United States Navy, in which he was a Hospital Corpsman in the Vietnam War and received the Medal of Honor.

An excerpt from the citation:

“Ballard fearlessly threw himself upon the lethal explosive device to protect his comrades from the deadly blast. When the grenade failed to detonate, he calmly arose from his dangerous position and resolutely continued his determined efforts in treating other marine casualties.” 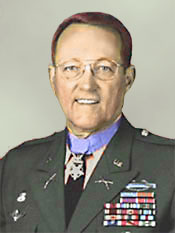 Roger Hugh Charles Donlon is a retired United States Army Colonel who was the first man to receive the Medal Of Honor in Vietnam, as well as the first member of the Special Forces so honored. In May, 1964 Donlon’s team was sent to Vietnam where they established an outpost at Nam Dong, about 15 miles from the border with Laos. Early in the morning of July 6, 1964, the base was attacked by a large force of Vietcong. Under Captain Donlon’s leadership, the two-battalion attack was repulsed. Captain Donlon was awarded the Medal of Honor for his actions.

An excerpt from the citation:

“Although exposed to the intense grenade attack, he then succeeded in reaching a 60mm mortar position despite sustaining a severe stomach wound as he was within 5 yards of the gun pit. When he discovered that most of the men in this gunpit were also wounded, he completely disregarded his own injury, directed their withdrawal to a location 30 meters away, and again risked his life by remaining behind and covering the movement with the utmost effectiveness. Noticing that his team sergeant was unable to evacuate the gun pit he crawled toward him and, while dragging the fallen soldier out of the gunpit, an enemy mortar exploded and inflicted a wound in Capt. Donlon’s left shoulder. Although suffering from multiple wounds, he carried the abandoned 60mm mortar weapon to a new location 30 meters away where he found 3 wounded defenders. ..”