U.S. Department of Defense
A Brief History of the Medal of Honor
Visit Website 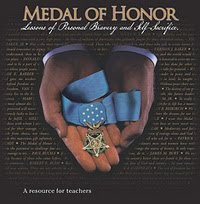 Adopt a living MOH Recipient
Adopt a MOH recipient. Learn about your recipient and let him know how you feel about him and his sacrifices.

Have a Patriotic School Assembly
Have one of the over 100 living recipients come and speak to your school and give the kids a bit of living history to learn from.

Memorial Day Celebration
The day off from school/work is nice but learn how you can pay tribute to those that died for the American people.

Scholarship Program
In addition to fully supporting the Society’s scholarship program for the children of Medal of Honor recipients, the Foundation, in partnership with the Armed Forces Communications and Electronics Association Educational Foundation, has awarded $4,000 scholarships to outstanding students enrolled in the Reserve Officer Training Corps (ROTC) programs of the Army, Air Force, Navy and Marine Corps.

Medal of Honor Recipients in the Classroom and Hospitals
Medal of Honor recipients are asked to speak to large groups frequently about the Medal of Honor. They talk about what the Medal represents and how they can apply the same principles of courage and selflessness in their daily lives. They talk to school children, visit veteran’s hospitals and attend many public events.

Medal of Honor: A Resource for Teachers
Lessons of Personal Bravery and Self-Sacrifice

Hall of Heroes Resources for Teachers

The National Medal of Honor Museum of Military History