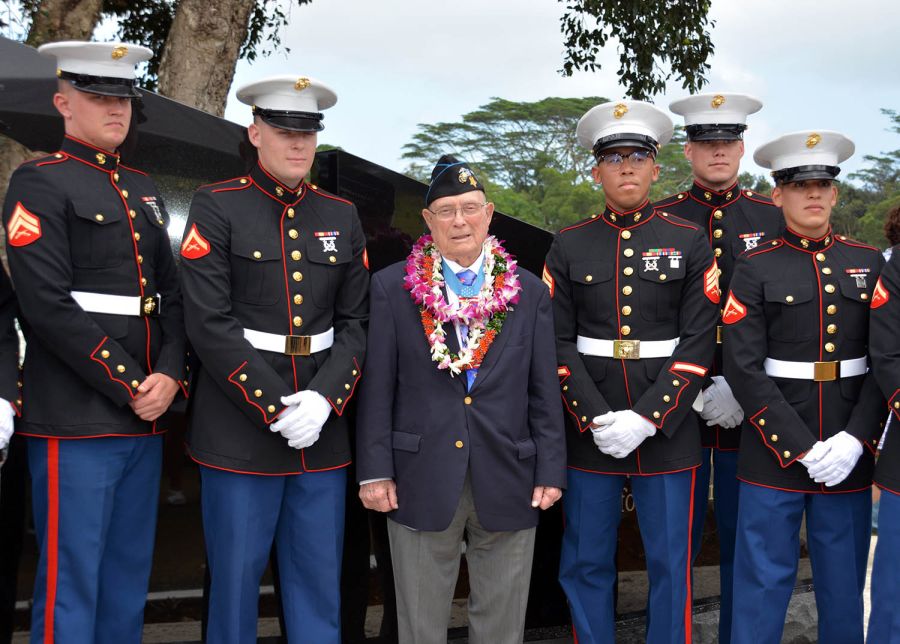 Williams established the Hershel Woody Williams Medal of Honor Foundation Inc. in 2013 to erect monuments to families who have lost loved ones in the service, in communities across the country.

A Gold Star family is a contemporary reference to the service flags/banners first flown by families during World War I.

A Blue Star signified that an immediate family member was serving in the military during war. If that loved one died, the Blue Star was replaced by a Gold Star.

Before joining the Marines, Williams delivered telegrams informing families of their loss in the war.

He would later note, “Consideration and recognition of families of those lost in the war was very inadequate.”

His foundation has created 35 Gold Star Families Memorial Monuments across the U.S., with another 42 monument projects planned.

The luncheon, sponsored by the nonprofit Northeast Ohio Foundation for Patriotism, will be held on the 74th anniversary of the D-Day invasion in World War II.

Tickets range from $45 to $1,000, and all proceeds go toward construction of the Gold Star Families Memorial Monument at the Louis Stokes Cleveland Veterans Affairs Medical Center.

Williams served with the 3rd Marine Division on Guadalcanal, Guam and Iwo Jima.

During his last battle, Williams, according to the Medal of Honor citation, was part of a unit attacking through a “network of reinforced concrete pillboxes [low, enclosed gun emplacements], buried mines and black volcanic sands.”

The citation noted, “His unyielding determination and extraordinary heroism in the face of ruthless enemy resistance were directly instrumental in neutralizing one of the most fanatically defended Japanese strong points encountered by his regiment.”