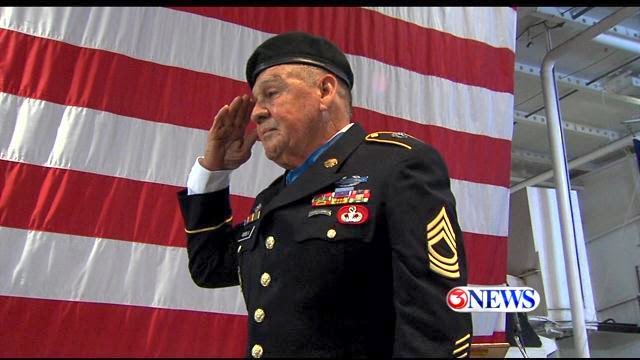 Sgt. Rodela was one of several servicemen who were passed up for
the honor because of their heritage. Now that he’s finally received it,
he says the experience has been overwhelming.

Corpus Christi native and Green Beret Master Sargent Jose Rodela
fought for his country in the Vietnam war four decades ago. Today he was
showered with many presents and certificates by numerous Coastal Bend
Veterans Associations.

“I never expected this. Such a crowd. Really. But I am Corpus Christi so I’m glad to be home,” said Sgt. Rodela.

Just a few days ago, President Barrack Obama presented him with the
Medal of Honor for risking his life for his men in Vietnam. He says the
whole experience was surreal.

“I was choked up, I didn’t know what to say. To stand behind me and
put that thing around my neck it was… It was awesome,” said Sgt.
Rodela.

But when he let the moment sink in, Sargent Rodela says it went from a joyous one to a solemn one.
“I was thinking about the people that got killed in that war. That, they’re not here. My friends,” said Sgt. Rodela.

As for the day, he earned the medal of honor. According to his Medal
of Honor Citation, while on patrol he ran into a force of North
Vietnamese Troops. Despite being wounded, Rodela repeatedly exposed
himself to enemy fire to help his wounded troops. After an 18-hour long
battle, they eventually fought off their attackers. 33 in his company
were wounded, 11 died.