President Obama will present the Medal of Honor to family members of U.S. Army Chaplain (Capt.) Kapaun in a White House ceremony on Thursday, Apr. 11th 2013 at 2:10 p.m. EDT in recognition of his valor during major combat operations against an armed enemy at Unsan, Korea and as a prisoner of war from November 1-2, 1950.

Kapaun began his military chaplaincy at Camp Wheeler, Georgia, in October 1944. He was sent to India and served in the Burma Theater and was promoted to Captain in January 1946.. He returned stateside in May 1946. Kapaun was discharged in 1946 and went to the Catholic University of Washington where in 1948 he earned an M.A. in education.

In September 1948, he re-joined the Army and resumed his chaplaincy at Fort Bliss, El Paso, Texas.

In January 1950 he was stationed near Mt. Fuji, Japan as a military chaplain until alerted into combat in July 1950. In that month, Kapaun was ordered to Korea from Japan, a month after North Korea invaded South Korea. Kapaun’s unit, the 8th Cavalry Regiment, 1st Cavalry Division, from Ft. Bliss landed in South Korea and participated in the fighting on the Pusan perimeter. From there, he was constantly on the move northward until his capture by Chinese Communists in November 1950.

His main complaint was lack of sleep for several weeks at a time. He constantly ministered to the dead and dying while performing baptisms, hearing first Confessions, offering Holy Communion and celebrating Mass from an improvised altar set up on the front end of an army jeep. He constantly would lose his Mass kit, jeep and trailer to enemy fire. He told how he was thoroughly convinced that the prayers of many others were what had saved him so many times up until his capture. He was awarded the Bronze Star Medal in September 1950 just before his capture.

He was captured near Unsan, North Korea. The POWs marched for 87 miles to a prison camp near Pyoktong, North Korea. Kapaun was able to influence some prisoners, who were ignoring orders from officers, to carry the wounded. At the camp, he dug latrines, mediated disputes, gave away his own food, and raised morale among the prisoners. He also led prisoners in acts of defiance and smuggled dysentery drugs to the doctor, Sidney Esensten. Kapaun developed a blood clot in his leg, dysentery, and pneumonia. He died on May 23, 1951 at the prison camp in Pyoktong.

To keep his fellow POWs from starving, Kapaun would break out of the camp at night, steal food and sneak back in to give it to those who needed it the most.

He was buried in a mass grave near the Yalu River. He was noted among his fellow POWs as one who would steal coffee and tea (and a pot to heat them in) from the Communist guards. On August 18, 1951, Kapaun was posthumously awarded the Distinguished Service Cross for his actions at Unsan.

Before leaving office on September 16, 2009, Secretary of the Army Pete Geren sent Tiahrt a letter, agreeing that Kapaun was worthy of the honor. Admiral Michael Mullen, Chairman of the Joint Chiefs of Staff, also agreed. Tiahrt hoped the United States Congress will approve a bill awarding the Medal of Honor to Kapaun, for signing by President Barack Obama.

The National Defense Authorization Act for Fiscal Year 2012 (Senate Bill 1867, Section 586) contains an authorization and a request to the President to award the Medal of Honor to Kapaun postumously for acts of valor performed by him during the Battle of Unsan on November 1 and 2, 1950 and while a prisoner of war until his death on May 23, 1951.

In February 2013, Tiahrt said he was informed by The Pentagon that Kapaun will be posthumously awarded the Medal of Honor in April 2013. President Obama will present the medal to Kapaun’s nephew at The White House on 11 April 2013. 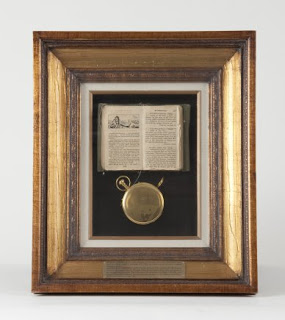 Reports received noted that Kapaun’s feet had become badly frozen, but that he continued to administer to the sick and wounded. He continuously went out under heavy mortar and shelling to rescue wounded and dying soldiers at personal risk of being captured or killed.

Many accounts have been given of the many creature comforts he provided his comrades of the 8th Cavalry Regiment during imprisonment. They were both spiritual and physical. He provided endless hours of prayer and what nourishment he could find to all he could to keep them from starving to death.

Kapaun, weakened as months passed on, managed to lead Easter sunrise service on Sunday, March 25, 1951. He was so weak that the prison guards took him to the hospital where he died of pneumonia on May 23, 1951. Kapaun received a citation for the Distinguished Service Cross.

A detailed account of Kapaun’s life is recounted in Fr. Arthur Tonne’s Chaplain Kapaun: Patriot Priest of the Korean Conflict. The author writes:

In a very definite sense, we are all beneficiaries from the life of Fr. Kapaun. He has left us a stirring example of devotion to duty. He has passed on to us a spirit of tolerance and understanding. He has given us a share of dauntless bravery – of body and soul. He has transmitted to every one of us a new appreciation of America, and a keener, more realistic understanding of our country’s greatest enemy – godlessness, now stalking the world in the form of communism. He has bequeathed a picture of Christ-like life. What Fr. Kapaun willed to us cannot be contained in memorials, however costly or beautiful. It is a treasure for the human soul – the spirit of one who loved and served God and man – even unto death.

When Kapaun was assigned to the Eighth Cavalry regiment – which was surrounded and overrun by the Chinese army in North Korea in October and November 1950 – he stayed behind with the wounded when the Army retreated. He allowed his own capture, then risked death by preventing Chinese executions of wounded Americans too injured to walk.

Some other articles about Fr. (Capt.) Kapaun:

Photo Credit:
Chaplain Kapaun carried this
small brass pyx on his person in the POW camp until it was confiscated
by his Chinese captors and made into a child’s toy. Kapaun always
carried the pyx inside the prison camp in case he needed to administer
the Holy Communion to the sick and dying. Following his death, Kapaun’s
fellow prisoners-of-war convinced their captors to return the pyx.
Kapaun received the Medal of Honor posthumously for his acts of selfless
service in providing aid and comfort to the wounded during the battle
of Unsan during the Korean War. The missal would have been used by Fr.
Kapaun when he was saying mass.