Army Sgt. 1st Class Leroy Petry, who lost his hand while throwing a grenade away from two other soldiers, will receive the Medal of Honor today (July 12, 2011). Petry is the ninth soldier to receive the medal since U.S. forces began fighting in Afghanistan in 2001, he is only the second who lived to receive it.

Leroy Arthur Petry (July 29, 1979) is a Sergeant First Class in the United States Army and successful nominee of the Medal of Honor. Petry was nominated for the medal for his actions during a firefight in Afghanistan as a Staff Sergeant in the 2nd Ranger Battalion. Upon his Medal of Honor presentation ceremony on 12 July, he will be the second living recipient of the medal for actions occurring since the Vietnam War.
Read more about Army Sgt. 1st Class Leroy Petry on Congressional Medal of Honor Foundation

While fighting with his unit in Karabilah, Iraq, an enemy soldier threw a grenade that landed next to him. Rather than allow the grenade to explode and kill or injure not only himself but several other Marines in the area he sacrificed himself and dove on top of the grenade. When it exploded Dunham was seriously injured and died eight days later.

President George W. Bush presents the Medal of Honor
to the family of Jason Dunham during a ceremony
in the East Room — Thursday, January 11, 2007.

Salvatore Augustine Giunta (January 21, 1985) Specialist Salvatore A. Giunta distinguished himself conspicuously by gallantry and intrepidity at the risk of his life above and beyond the call of duty in action with an armed enemy in the Korengal Valley, Afghanistan, on October 25, 2007.

“Without regard to the ongoing fire, Specialist Giunta engaged the enemy before prepping and throwing grenades, using the explosions for cover in order to conceal his position. Attempting to reach additional wounded fellow soldiers who were separated from the squad, Specialist Giunta and his team encountered a barrage of enemy fire that forced them to the ground.”

“The team continued forward and upon reaching the wounded soldiers, Specialist Giunta realized that another soldier was still separated from the element. Specialist Giunta then advanced forward on his own initiative. As he crested the top of a hill, he observed two insurgents carrying away an American soldier. He immediately engaged the enemy, killing one and wounding the other. Upon reaching the wounded soldier, he began to provide medical aid, as his squad caught up and provided security.”

He is the first living person to receive the United States Armed Forces’ highest decoration for valor, the Medal of Honor, for actions that occurred since the Vietnam War. 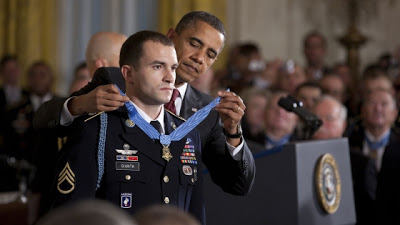 Michael Anthony Monsoor (April 5, 1981 – September 29, 2006) was a U.S. Navy SEAL killed during the Iraq War and posthumously received the Medal of Honor. Monsoor enlisted in the United States Navy in 2001 and graduated from Basic Underwater Demolition/SEAL training in 2004. After further training he was assigned to Delta Platoon, SEAL Team Three.

Delta Platoon was sent to Iraq in April 2006 and assigned to train Iraqi Army soldiers in Ramadi. Over the next five months, Monsoor and his platoon frequently engaged in combat with insurgent forces. On September 29, 2006 an insurgent threw a grenade onto a rooftop where Monsoor and several other SEAL and Iraqi soldiers were positioned. Monsoor quickly smothered the grenade with his body, absorbing the resulting explosion and saving his comrades from serious injury or death. Monsoor died 30 minutes later from serious wounds caused by the grenade explosion.

On March 31, 2008, the United States Department of Defense confirmed that Michael Monsoor would posthumously receive the Medal of Honor from the President of the United States, George W. Bush. Bush presented the medal to Monsoor’s parents on April 8, 2008. In October 2008, United States Secretary of the Navy Donald C. Winter announced that DDG-1001, the second ship in the Zumwalt class of destroyers, would be named Michael Monsoor in his honor. 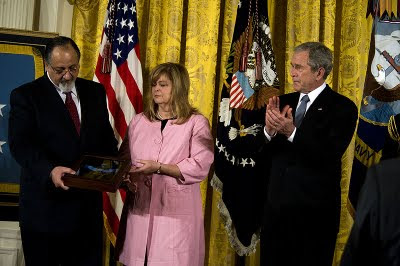 President of the United States, George W. Bush presented the medal to Monsoor’s parents on April 8, 2008.

Michael Patrick Murphy (May 7, 1976 – June 28, 2005) was a United States Navy SEAL posthumously awarded the United States military’s highest decoration, the Medal of Honor, for his actions in 2005 during the War in Afghanistan. He was the first person to be awarded the medal for actions in Afghanistan; and the first member of the U.S. Navy to receive the award since the Vietnam War.

Murphy was sent on several missions while participating in the Global War on Terrorism and was killed on June 28, 2005 after his team was compromised and surrounded by Taliban forces near Asadabad, Afghanistan.

In addition to the Medal of Honor, Murphy received other awards including the Silver Star and Purple Heart. Since his death, a United States Navy destroyer, a post office and a park have been named in his honor.

President George W. Bush stands with Dan and Maureen Murphy, parents of Lt. Michael P. Murphy, after the Navy SEAL was honored posthumously with the Medal of Honor during ceremonies Monday, Oct. 22, 2007, in the East Room of the White House. White House photo by Joyce N. Boghosian

Jared Christopher Monti (September 20, 1975 – June 21, 2006) was a soldier in the United States Army who received the United States military’s highest decoration for valor, the Medal of Honor, for his actions in Afghanistan.

Monti was deployed with his unit when they were attacked by a group of enemy insurgents. When another soldier was wounded, Monti attempted to rescue him and was killed in action. The President signed the authorization for Monti to receive the Medal of Honor and the medal was presented to the family in a ceremony at the White House in 2009. He was the sixth person from the wars in Iraq and Afghanistan to be awarded the Medal of Honor. 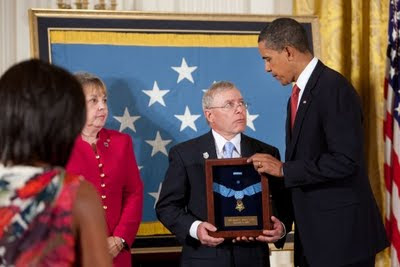 President Barack Obama stands with Paul and Janet Monti as he posthumously awards their son, Army Sergeant 1st Class Jared C. Monti from Raynham, Massachusetts, the Medal of Honor for his service in Afghanistan during a ceremony in the East Room of the White House, Thursday, Sept. 17, 2009.

Paul Ray Smith (September 24, 1969 – April 4, 2003) was a United States Army Sergeant First Class who posthumously received the Medal of Honor for his actions in Operation Iraqi Freedom. While serving with B Company, 11th Engineer Battalion, 3rd Infantry Division in Baghdad, Iraq his team was attacked by a group of Iraqi fighters and after a short firefight he was killed by Iraqi fire.

For his actions during this battle he was recommended and approved for the Medal of Honor. Two years later, the medal, along with the newly approved Medal of Honor flag, were presented to his family; specifically to his eleven year old son David, at a White House ceremony by the President of the United States George W. Bush.

Medal of Honor presented to his eleven year old son David, at a White House ceremony by the President of the United States George W. Bush.

Ross Andrew McGinnis (June 14, 1987 – December 4, 2006) was a soldier who served in the United States Army during the Iraq War and was posthumously awarded the United States’ highest decoration for bravery, the Medal of Honor.

While serving as the gunner in a HMMWV, his convoy was attacked and a hand grenade was thrown into his vehicle. McGinnis was subsequently killed in action when he threw himself on the grenade, saving the lives of at least four other soldiers in the vehicle. He was the fourth soldier to receive the Medal of Honor during the Iraq War, which was presented to his family following his death.

President George W. Bush shares a moment with Tom and Romayne McGinnis, of Knox, Pennsylvania, after presenting them the Congressional Medal of Honor in honor of their son, Private First Class Ross A. McGinnis, who was honored posthumously Monday, June 2, 2008, in the East Room of the White House.

“On January 25, 2008 Sergeant Miller found himself willingly leading a team of Afghan National Security Forces and Coalition soldiers during a combat reconnaissance patrol in Kunar Province near the Pakistan border. Insurgents hiding in a structure attacked Miller’s team. A fellow team-mate called for close-air support to drop ordinance on the insurgent position, disrupting their attack. When the combined patrol moved toward the structure to check for any remaining enemy threats, insurgents again fired using heavy weapons.”

“Miller’s team captain was seriously wounded within the first minutes of the attack. While his commander was moved to safety, Miller returned fire. At great personal risk to himself, Miller remained at the front of the patrol and continued to lay down suppressive fire on multiple insurgent positions, allowing his wounded commander to be pulled out of the line of fire, ultimately saving his life. 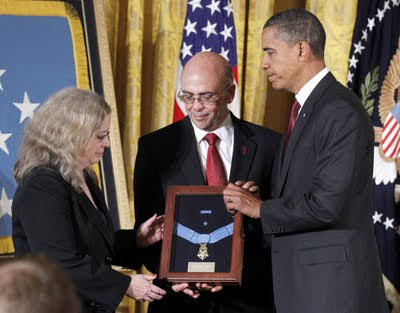 President Barack Obama presents the Medal of Honor posthumously to the parents of Staff Sgt. Robert J. Miller – father Phil, and mother Maureen Miller – Oct. 6, 2010, during a ceremony in the East Room of the White House in Washington, D.C. Miller