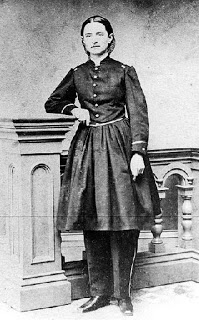 Mary Edwards Walker, one of the nation’s 1.8 million women veterans, was the only woman to earn the Medal of Honor, for her service during the Civil War.

Though a World War II, Liberty ship, the SS Mary Walker, was named for her and in 1982, the U.S. Postal Service issued a 20 cent stamp in her honor, in April 2011 the residents of her hometown of Oswego, New York will honor her with a statue.

According to Post-Standard columnist, Dick Case in his article, Statue of Oswego County woman who served as a surgeon in Civil War ready for casting:

A “bigger than life” statue of Dr. Mary Walker, a Civil War surgeon and dress reformer, will be dedicated April 30 in front of the town hall. The sculptor, Sharon BuMann, plans to send the clay model of the statue to the foundry for casting in bronze next week.

The statue is a gift from the Oswego community, according to Theresa Cooper, the Oswego town clerk who headed the campaign to get the statue done. “I’m so proud of the community,” Theresa explained. “This is a major piece of our history.”

Although there were larger donations from Oswego County and Wal-Mart, most of the $53,000 was raised in individual contributions, according to the clerk, who also is an officer of the town historical society, which is officially sponsoring the statue.”

As a young woman, she taught at the school to earn enough money to pay her way through Syracuse Medical College, (the nation’s first medical school and one which accepted women and men on an equal basis ) where she graduated as a medical doctor in 1855 as the only woman in her class.

When war broke out, she came to Washington and tried to join the Union Army. Denied a commission as a medical officer, she volunteered anyway, and practiced as a nurse. As an unpaid volunteer, she worked in the US Patent Office Hospital in Washington. Later, she worked as a field surgeon near the Union front lines for almost two years (including Fredericksburg and in Chattanooga after the Battle of Chickamauga).

Finally, she was awarded a commission as a “Contract Acting Assistant Surgeon (civilian)” by the Army of the Cumberland in September 1863, becoming the first-ever female U.S. Army Surgeon.

“On April 10, 1864, dressed in full uniform, she accidentally walked into a group of Rebel soldiers just south of the Georgia-Tennessee border. Their commanding officer, General Daniel Harvey Hill, ordered her sent to Richmond as a prisoner. She was released in time to help during the battle for Atlanta as a surgeon in Louisville, Kentucky. Walker was greatly pleased that she had been traded “man for man,” for a Confederate Officer.” About North Georgia

On November 11, 1865, President Johnson signed a bill to present Dr. Mary Edwards Walker with the Congressional Medal of Honor for Meritorious Service, in order to recognize her contributions to the war effort without awarding her an army commission. She was the only woman ever to receive the Medal of Honor, her country’s highest military award.

“In 1917 her Congressional Medal, along with the medals of 910 others was taken away when Congress revised the Medal of Honor standards to include only “actual combat with an enemy” She refused to give back her Medal of Honor, wearing it every day until her death in 1919. A relative told the New York Times:

“Dr. Mary lost the medal simply because she was a hundred years ahead of her time and no one could stomach it.” An Army board reinstated Walker’s medal posthumously in 1977, citing her “distinguished gallantry, self-sacrifice, patriotism, dedication and unflinching loyalty to her country, despite the apparent discrimination because of her sex.” Women of Courage

The dedication ceremony of the statue of Mary Edwards Walker in Oswego, New York will be preceded by a brief parade to the town hall. The parade begins at 9:30 a.m., followed by the dedication at 10 on April 30th, 2011.

The Early Days of Feminism

Dr. Walker lived a controversial life. She lectured throughout the United States and in Europe on women’s rights, dress reform, health issues, and sexual and political equality. She tried to vote, but was turned away.

Despite the controversy surrounding her career and her politics, Dr. Mary Walker was proud of her accomplishments as a physician and an advocate for women’s rights. As she concluded in 1897, “I am the original new woman…Why, before Lucy Stone, Mrs. Bloomer, Elizabeth Cady Stanton and Susan B. Anthony were—before they were, I am. In the early ’40’s, when they began their work in dress reform, I was already wearing pants…I have made it possible for the bicycle girl to wear the abbreviated skirt, and I have prepared the way for the girl in knickerbockers.” Changing the Face of Medicine

“Whereas it appears from official reports that Dr. Mary E. Walker, a graduate of medicine, “has rendered valuable service to the Government, and her efforts have been earnest and untiring in a variety of ways,” and that she was assigned to duty and served as an assistant surgeon in charge of female prisoners at Louisville, Ky., upon the recommendation of Major-Generals Sherman and Thomas, and faithfully served as contract surgeon in the service of the United States, and has devoted herself with much patriotic zeal to the sick and wounded soldiers, both in the field and hospitals, to the detriment of her own health, and has also endured hardships as a prisoner of war four months in a Southern prison while acting as contract surgeon; and Whereas by reason of her not being a commissioned officer in the military service, a brevet or honorary rank cannot, under existing laws, be conferred upon her; and Whereas in the opinion of the President an honorable recognition of her services and sufferings should be made. It is ordered, that a testimonial thereof shall be hereby made and given to the said Dr. Mary E. Walker, and that the usual Medal of Honor for meritorious services be given her.”